It was 1977 when I fell in love with football, but in 1978 that love fast became an addiction thanks to the amazing World Cup in Argentina, complete with the ticker tape entrances and some truly great matches.

I had decided to follow Scotland, not only as the only home UK nation to qualify, but more for being a budding Liverpool fan, Kenny Dalglish was in his pomp, with Graeme Souness behind him, it was an easy choice.

What followed over the course of that month of football opened my young eyes to the game in South America, but more so to those iconic bright yellow shirts, outrageous names Zico & Rivelino, and a stunning brand of football. Argentina and Kempes may have won the cup, but those Brazilian’s left an indelible mark on me that remains to this day. 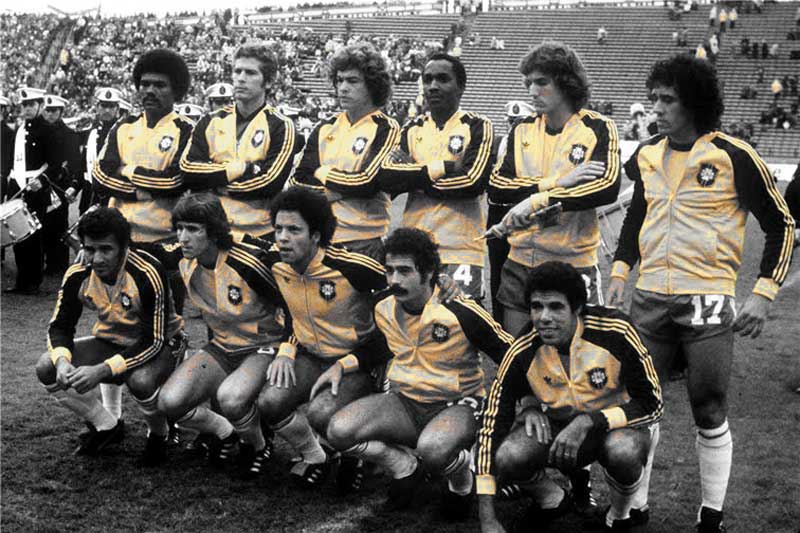 This was how I wanted to see football being played. A smile on the face, humiliating skills, and fire in the boots. Scotland fell at the first hurdle despite an amazing win against the Dutch and a very special “ Brazilian style” goal from Archie Gemmill. The old format of the World Cup saw Brazil beaten to a place in the final by Argentina, on goal difference, and had to settle for 3rd place, but I was hooked on “O Jogo Bonito”.

The World Cups which followed only enhanced my love for Brazil as a football nation. They were the team everyone wanted to watch, and with the style and class they always showed, who could be blamed. Those names got more and more God like as the years went by, in 1982 they even had a Socrates, and what a player he was!

Then you arrive in Brazil and discover its not Socrates as we would say it – it’s Sock-rats in Portuguese. It kinda loses something in the pronunciation don’t you think? The 1982 team was a joy to watch, the best team never to win a World Cup in my opinion.

Through 1986 to 2010 I always wanted those Boys From Brazil to prevail. Even in the 1986 World Cup, when they played against my country, Northern Ireland, nobody minded losing to them; they were Brazil. Pat Jennings had one of the best games of his career that day and was still beaten 3 times; when in reality it should have been double figures.

During those years we became more and more used to names of the Brazilian national team as they started to ply their trade in Europe. Gone were the days when you got to see them every 4 years, they became household names in Europe. Players like Romario, the real Ronaldo, Ronaldinho and Rivaldo rocked into Europe and it was a privilege to witness their careers unfold on our TV screens.

Shortly after the 2010 World Cup I made the move from the UK to live full time in Brazil with my Carioca (Rio) wife. We based ourselves in Natal in the North East of the country and bought a place right next door to the Frasqueirão, the home of ABC FC, a Serie B side.

What was more exciting was Natal was a host city for 2014, and I was going to be there. The very thought of the Copa in Brazil fires the passion and imagination of any football fan, along with the hope Brazil would win it, sadly it was just not to be, and the party never arrived.

Initially, I was told that it was safer not to attend the local games, especially being a Gringo, and for sure never to attend a local Classico Derby with Amèrica RN, the other Serie B side in Natal. This only served as a challenge, and after having to watch my first two Classicos from the windows of the 38th floor of the apartment building, I vowed I was going to be in the stadium for one of these games.

The noise at these games, before, during and after is immense, a very different vibe to crowds in Europe, a different type of passion. It was a few weeks after this that I attended my first match; full of nerves pondering whether would I ever get home alive? I need not have worried, while there is an element of menace and danger at these games, rarely does it manifest into anything nasty inside or near the ground. What I did witness was an atmosphere full of warmth, curiosity at a Gringo arriving complete with ABC shirt, and noise.

My first Classico was in 2013 almost 2 years after I started attending the games regularly, it didn’t disappoint, as I will attempt to outline for you.

The week before a Classico in Natal you begin to notice many more ABC and America shirts on the streets; there are always plenty on any given day, but you know when the Classico looms – it’s just different.

On match-day, the mood of the city is all about this game. The car horns start early in the morning, and as afternoon approaches the air horns, drums, shouting and banter between fans starts on the way to the ground.

The feeling you get making the short walk to the stadium is very different to that of a normal game, but the Brazilian welcome is always the same; warm. I always like to arrive very early, eat churrascho (BBQ), drink beer and chat to the natives who are always in disbelief that a gringo supports their team.

I love the noise outside, the Bateria (drummers) just add to the whole atmosphere, occasionally they even do some Samba. In short everyone is happily singing and drinking, and disturbingly not very interested in entering the ground.

Its quite normal for the ground to remain 2/3 empty until the 15 min mark of the game, I have never understood the logic behind this culture, but its only one of many on a long list of things I may never understand in Brazil.

Teams take to the pitch with an explosion of fireworks, which last a good 5 minutes and causes the kick off to be a smoke screened moment as the smoke descends across the stadium. When the crowd finally does arrive, it’s a pretty special, and somewhat tribal experience. The drums, dancing, flags, and chanting are enough to get the juices of even an experienced football goer flowing. 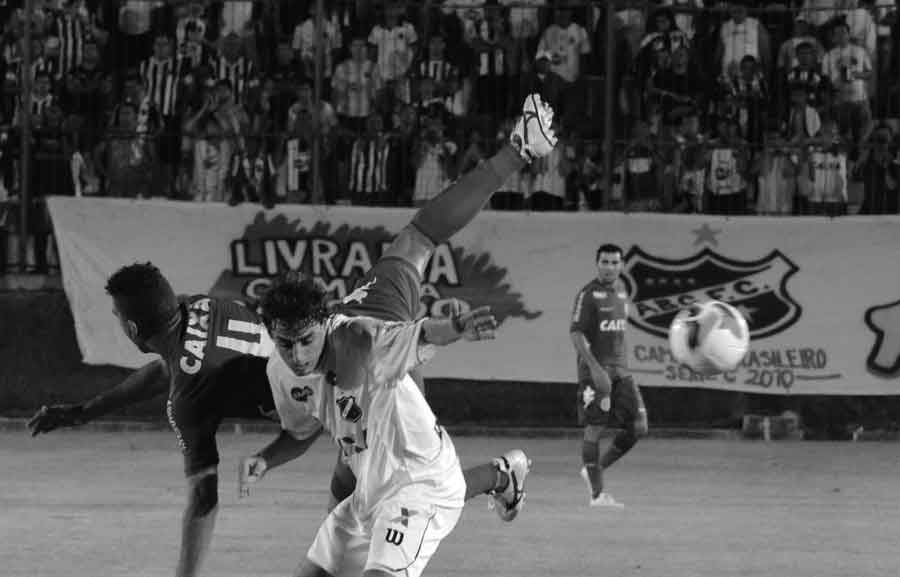 There is a cheerleader of the “Ultra Os Alvinegro’s”, standing on fold up table, leading the calls in a complete frenzy. This is the area of the ground I love and always want to be in, its madness, even when its half empty. Being swept along in the tide of bodies as they dance side to side and forward and back, you have no choice but to follow in the flow or be trampled into the ground.

Stewards are there for show, they don’t offer anything that I have seen at games. As is the norm in Brazil, people are free to behave, and express themselves in whatever way they want. The game was pretty tasty too.

The lead changed hands, the tackles belonged to the football archives of the 1970’s, bordering on GBH, but the passion and desire to win was unquestionable. Yellow cards became red cards, followed by more yellows and more reds. What was this? More UFC than ABC?

With the score at 3-3 one of the Amèrica players decided to make some unpleasant gestures towards the home fans and it all kicked off into an on pitch brawl! A further 4 red cards, making 9 in total, caused the game to be abandoned leaving a poisonous volatile atmosphere. I can’t explain why I find atmospheres like this so appealing, its just pure adrenaline, and I love it.

The poor match officials had to have a police escort off the pitch, complete with a tunnel of riot shields to protect them from the rain of missiles! All of this stirred memories of the “bad old days” of English football in the 1980’s. The crowd didn’t really leave either, they just stayed and hurled abuse at the opposition fans who happily responded for a good 20 minutes after the teams have left the pitch.

Of course not all games have such drama, most are mundane affairs with a handful of away fans, which is understandable given the sheer size of the country and logistics of travel.

I have watched games live in Serie B for several years now and Serie A on TV. What I have found has been slightly depressing given the esteem in which I hold Brazilian football.

There is no conveyor belt of young talent in Brazil any more, and any such talent is quickly and taken to the academies of Europe before they get to kick a ball in anger in Brazil. Some make it, but they are few and far between, as most come back home and play in Brazil.

There is another common occurrence with Brazilian players in Europe. They look fantastic in the lower level standard of the Brazilian leagues, only to look less than ordinary when taken to Europe. Good examples of this would Diego Tardelli who looked the part for Atlètico Minerio after failing to impress or adapt fully in Russia or Holland. Paulinho, now at Tottenham, looks a bit out of his depth so far, but was a world beater in the Corinthians side he left.

It really shouldn’t come as a shock when you consider that Fred and Jo are still valuable players in Serie A. Another ex Liverpool player Diego Cavalieri looks great in Brazil, and is described as a superstar by commentary teams, but he never broke into the Liverpool or Cesena teams while in Europe.

This is the sad reality of Brazilian football for a Gringo who grew up worshipping the men in yellow shirts, and the brand of football that was synonymous with it. When one looks to the future of Brazilian football, one must cast an eye towards Europe to see any developing talent, as 95% of the best talents are already there.

Another worrying aspect is the likes of Diego Costa rejecting his home country to play for Spain. His name is never mentioned in Brazil, when he scores the commentary is as muted as the report of a goal against Brazil.

Compare that to the pure pride and excitement of commentators celebrating the great goal scored by Philippe Coutinho against Southampton this season, its night and day. The Coutinho goal was still being celebrated long after the match had restarted, a Costa goal gets a simple 1 second “gol”. 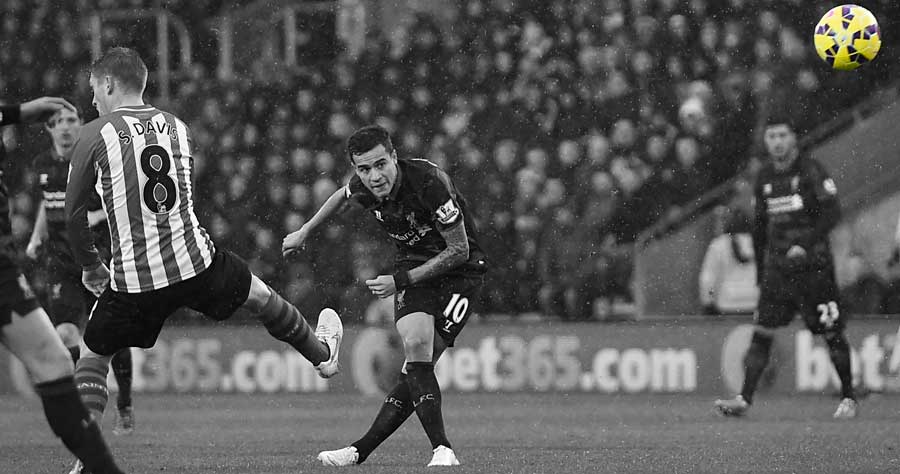 One can only ponder how different the 2014 Copa would have been for Brazil if Costa had have been available to Scolari, but others here remind me that Costa “got what he deserved” for abandoning that yellow shirt with his early exit with the Spanish.

I still have the pleasure of watching one of the greats from that 1978 team, Rivelino, albeit as a pundit on Brazilian television. As for the other member of the 1978 team I mentioned, Zico, I managed to bump into him, literally, in Lappa in Rio, and didn’t recognise who he was.

Imagine the shame of having to be told by your wife that you nearly knocked over one of your childhood heroes! This is all part of the madness that ensures that my love affair with Brazil will continue for many years to come, I just hope O Jogo Bonito can be Bonito once more in this football mad country.