The continuing dispute over who holds the contract of new Brazil under 20 player Bruno Mendes has reached what might be a conclusion today, after his loan contract at Botafogo was reinstated by the CBF.

As is often the case in the region, Mendes’ contract was subject to a squabble involving multiple parties, including his former club Guarani, the sports agency HAZ, his “development club” Macae in Rio, ex-Guarani defender Andrei (!), and his current club Botafogo. 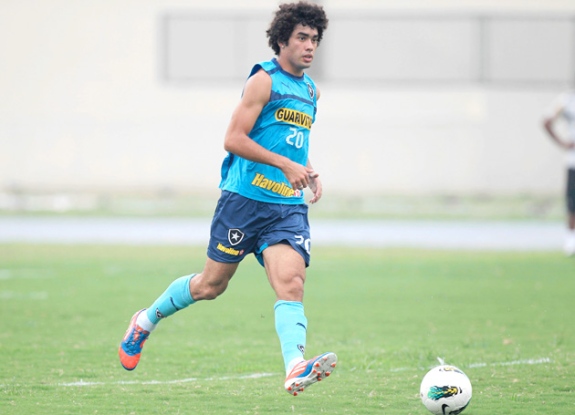 The legal wrangle surrounding his contract kept Bruno Mendes from playing the last two games of the season.

Bruno Mendes’ contract and economic rights were bought from Guarani by the HAZ sports agency, who then used the Macae club to develop their player before looking to send him to a more high profile club. Botafogo were this club and the player transferred to there in what is effectively a loan from the HAZ sports agency. There is supposed to be an option for the club to buy his full economic rights in the future, but for now Botafogo own 25% of any sale value if the player is sold before the end of his contract in December 2013.

The spanner in the works is at his former club Guarani, where during a previous dispute about unpaid wages with former player Andrei, they offered Bruno Mendes’ contract as some kind of collateral towards the money which would pay Andrei what he was owed. Andrei never received any payment from the club, and in October 2012 he started court proceedings against Guarani, and as a result Bruno Mendes’ contract came into play. As a result Mendes’ subsequent contracts with HAZ, Macae, and Botafogo were suspended, until the legal proceedings relating to Guarani and Andrei had reached a conclusion.

During this time Mendes was forced to miss the last two games of the Brasileirao and was unable to train with Botafogo. But there was a rumour he was able to train as long as he wasn’t wearing a Botafogo shirt!

Today the proceedings came to an end as HAZ via Macae agreed to pay Guarani enough money to pay Andrei what he was owed. It is presumed that Guarani will pay the money back to HAZ in instalments  but more importantly the original contract of Bruno Mendes with Botafogo has been reinstated!

*Note that the information in this article is taken from badly translated Portuguese articles, and the subject is confusing enough anyway, but efforts have been made to be as accurate as possible!