Sporadic live updates from the game between Botafogo and Deportivo Quito in the Copa Libertadores primeira fase. The game is being played at the famous Maracanã stadium in Rio de Janeiro. The winners will go into the second phase, and will join a group featuring Chile’s Unión Española, San Lorenzo of Argentina, and Independiente of Ecuador.

Scroll down for live updates, including a selection of tweets, and images where available! Follow @TheBotafogoStar on Twitter to get involved. 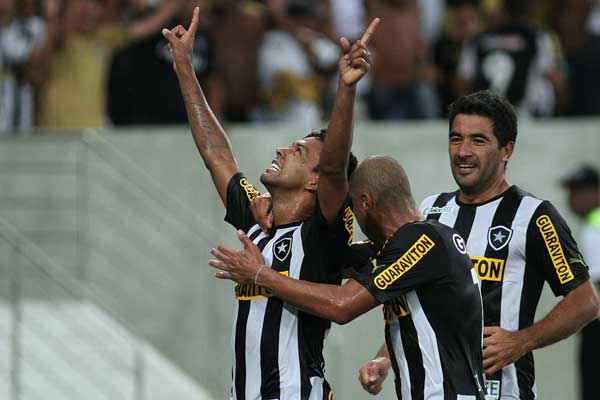 FULL TIME – Botafogo get the job done in style, and they have a new hero in the shape of the outstanding Wallyson. The striker provided a real cutting edge, and it was a great move from coach Eduardo Hungaro to start him.

90′ GOAL! – Botafogo make it four as Henrique gets a goal! Júlio César puts in another dangerous cross, Henrique forces an excellent save from Ramírez, but puts in the rebound.

90′ – Botafogo uncharacteristically calm as they look to see the game out. There will be some big celebrations after this.

86′ – Lovely bit of play from Henrique as he backheels to Lodeiro. Makes a great run for the return pass but the Uruguayan chooses to shoot the ball into the crowd instead.

85′ – Substitution – Wágner comes off and is replaced by Rodrigo Souto for Botafogo.

82′ – Substitution – Henrique replaces the hero of the day, Wallyson.

80′ – GOAL!!! For Botafogo! – Wallyson completes his hat-trick as Botafogo hit Quito on the counter-attack. Great through ball from Elias put him through one-on-one, and he hit it through Ramirez again.

75′ – Lodeiro should have wrapped up the game for Botafogo. Júlio César makes inroads down the left, cuts it back to Lodeiro who skies it over the bar. Should have scored.

74′ – Even after all this, one goal would still win it on away goals for Quito.

67′ – GOAL! do Botafogo! – Wallyson! Who else? He dribbles into the area, says au revoir to Bonjour, turns inside and fires through Ramírez. Nice assist from Lodeiro earlier in the move.

66′ – Substitution – Elias comes on for the disappointing Ferreyra for Botafogo.

63′ – Wallyson is everywhere for Botafogo. Making things happen, creating chances for himself and others.

62′ – Back to football, Wallyson fires a vicious shot but it’s blocked, corner. Cleared.

61′ – It’s gotten scrappy, and seems to be only a matter of time before we see a red card. Edilson is fuming. Not sure what about, he’s just general upset. Maybe he just realised Seedorf left.

54′ – Substitution – Estupiñán can’t continue as he hobbles off as a result of that Edílson challenge. Walter Calderón replaces him for Quito.

50′ – Edilson lucky to stay on the pitch after a dangerous two footed lunge as Quito break. Botafogo very lucky to still have 11 participants.

48′ – Bolívar’s header hits the defender Romero and bounces just wide, after a free kick from the left.

48′ – Wallyson plays Ferreyra in, and the Argentine tries to pass it back when the shot was the better option.

46′ – Jefferson ventures out of his area in what is an unsteady start to the second half.

The 2nd half is underway!

The players are slowly making their way out for the second half, due to start soon.

Edilson is a thorn in Quito's side. They hate him. Driving runs. Lodeiro is ALWAYS playing forward and looking to create @TheBotafogoStar 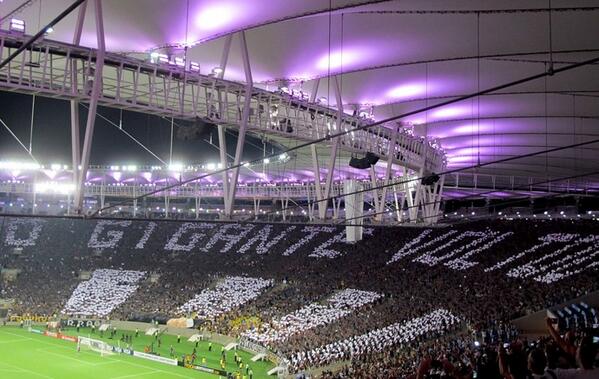 Botafogo fans in the Maracanã. “The giant returned”

HALF TIME – Botafogo 1, Deportivo Quito 0
A crazy first half ends as Botafogo get the first of the goals they need. If the scores stay like this the match goes to penalties, but if Quito score Botafogo will need two more.

47′ – Lodeiro feeds Ferreyra but the striker can’t take the pass in his stride.

45′ – Great cross from Botafogo left back Júlio César but the referee blows for a foul on the ‘keeper.

44′ – Madness! Botafogo win a corner with Quito keeper Ramírez miles out of his goal near the corner flag. The corner is taken quickly but the shot was blocked.

41′ – The free kick from far out on the right leads to an Edilson special – hit with power but off target.

41′ – Wallyson wins another free kick after tripping himself up. Somehow Quito’s Luis Romero is booked for it.

37′ – GOAL!!….. do Botafogo! Wallyson strikes a volley from close range, after Wágner heads an Edilson cross into the air. Smashing finish from the new signing.

36′ – It’s all a bit desperate from both sides, as you might expect, but Botafogo have more quality and need to be more patient and composed in order to make it tell.

31′ – Quito counter attack but Vega skies it over.

30′ – Another free kick, this time from a similar position on the left hand side….but Edilson’s free kick is headed away.

29′ – Some fouling in the box, referee gives Quito a free kick.

28′ – Edilson storms forward from his right back position for Botafogo, and wins a free kick in a dangerous area.

25′ – Jorge Wagner wins a corner for Botafogo… and this time Ferreyra heads wide.

20′ – Ramírez in the Quito goal flapping at another cross which should have been easy to take. Encouraging for Botafogo’s forwards.

18′ – Tricky play from Wallyson wins a corner, from which Ferreyra hits the post. Dória was lurking but couldn’t re-arrange himself to put in the rebound!

15′ – Wallyson shoots a decent opportunity for Botafogo straight into the side-netting. The ball came loose and landed with him, but he couldn’t keep his composure.

13′ – Much hyped young defender Dória not looking entirely convincing in possession as the ball squirms through him to Jefferson, narrowly missing the feet of the attacker.

11′ – Doria heads over the bar from a Botafogo free kick

03 – Nicolás Lodeiro’s header hits the side netting – bright start for the Botafogo.

01′ – The game is underway at the Maracanã! And a Quito player is down injured (possibly not wasting time) already.

Botafogo v Deportivo Quito moments from kick off. Great atmosphere at the Maracana 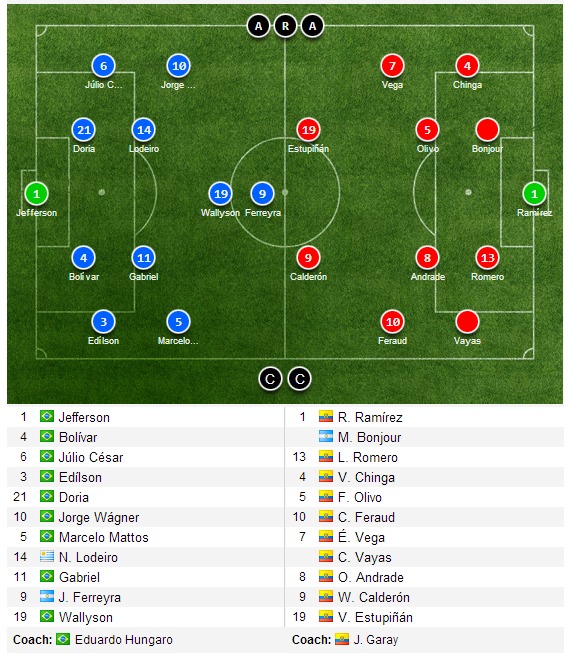 #Botafogo have waited 17 years to return to the #Libertadores, to go out prior to group stage would be unthinkable. 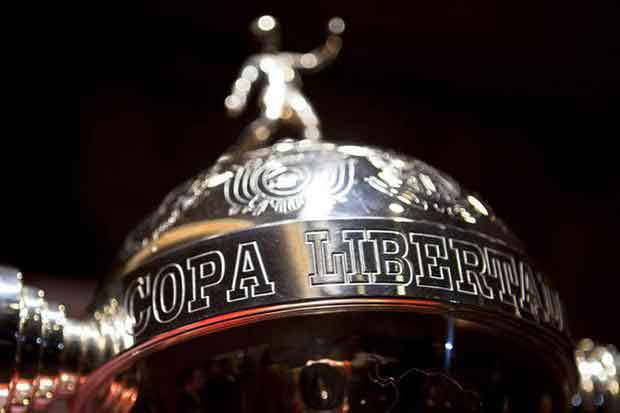