It’s difficult to believe that it’s over two years since Manchester City midfielder Fernandinho played for Brazil. It’s not that he wasn’t impressive for his previous club Shakhtar Donetsk, after all, Manchester City wouldn’t have paid the massive £35m fee for a mediocre player.

For a long time the Ukraine, and similarly Russia, has been the back-burner of the Brazilian talent cooker. Shakhtar have a rich history of successful Brazilian players, and having joined the club in 2005 from Atlético Paranaense, Fernandinho emerged during his eight years there as one of the best they’d ever had. On leaving the club he was their vice captain, and his trophy cabinet boasted six Ukrainian league titles, four domestic cups, and one UEFA Cup – the first and only European cup in the clubs history.

After a tentative start in Manchester City blue, people began to realise that Fernandinho was vital to Manuel Pellegrini’s team, and these days a team-sheet without his name on it has City fans worried.

He arrived in England as a dynamic box-to-box midfielder, with the energy and athleticism to cover the majority of the pitch. Playing alongside Yaya Touré, he was initially required to perform a restrained holding role, and was often found covering for the big Ivorian who would power his team forward like a juggernaut, with his trademark surging runs. Fernandinho noted Touré’s imperfections, and was always around to clean up when his team-mate was having an off-day.

Since then the pair have developed a better understanding in the centre of City’s midfield, and now Fernandinho can also be found bursting forward as he once did at Shakhtar. There is a noticeable spike in his productivity and goals towards the end of 2013, and since December the side have only dropped points on one occasion with Fernandinho in the team (a 1-1 draw away at Southampton). 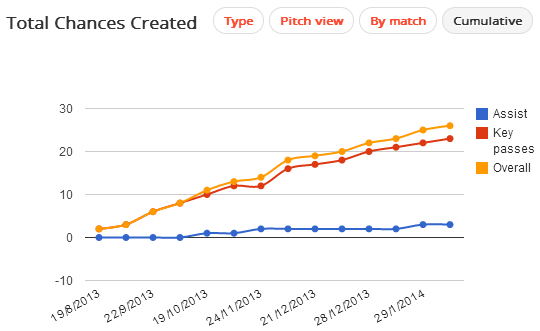 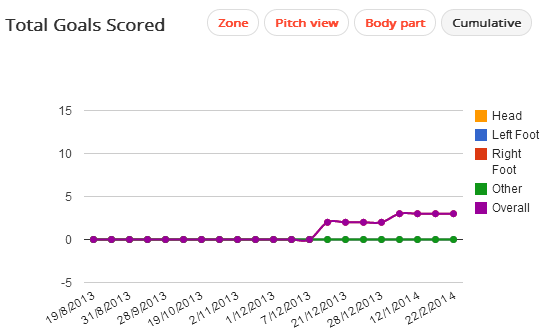 Statistics and diagrams taken from Squawka

This form has led to a long deserved Brazil call-up, with Luiz Felipe Scolari finally noticing the midfielder’s potential to improve the national side. Whilst the usual Brazil number 8, Paulinho, has been good if not outstanding for a Spurs side who lie 5th in the league, Fernandinho has been vital to a title challenging team.

It might be too late in the day to suggest that the pair could develop an understanding similar to the one Fernandinho has with Touré at his club, but Manchester City’s Brazilian has proven he can be as effective as a holding number 5, as he is as a box-to-box number 8.

The upcoming friendly against South Africa might be seen as a final test for fringe players such as Fernandinho, but it would be foolish of Scolari to exclude the City star from his final World Cup squad.