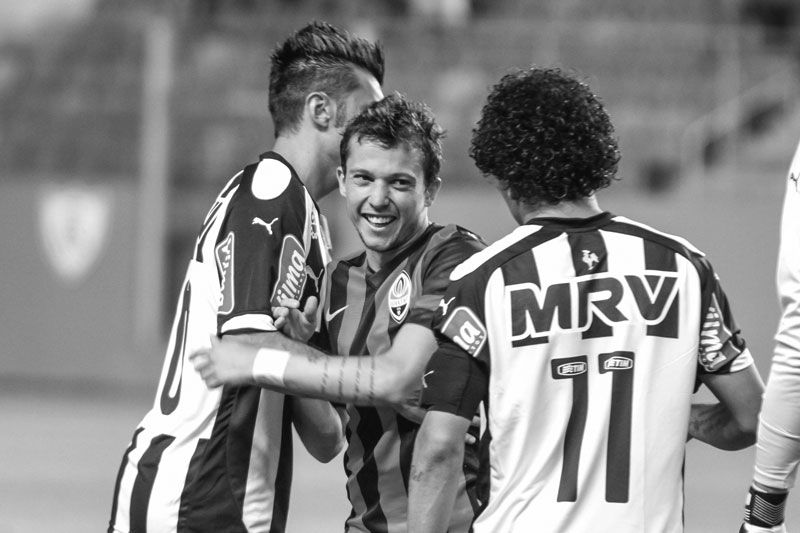 During the last fortnight, Shakhtar Donetsk have been touring Brazil, playing winter break friendlies with Serie A sides Flamengo, Atlético Mineiro, Internacional, Cruzeiro and recently relegated Bahia. With 14 Brazilians currently listed in their first team squad, this was a literal homecoming for a significant portion of the Shakhtar squad. For no player was this slight return more spiritually nourishing than for Bernard Duarte. His move to the Ukraine has been difficult from the very beginning and his desire to leave may as well be inked onto his already heavily tattooed body.

The dichotomy between Bernard’s spells in Brazil and Ukraine could be seen at his feted homecoming at Estádio Independência last Wednesday, his former stomping ground with boyhood club Atlético Mineiro. The 22 year old was greeted as a returning apotheosis, absorbing the adulation of the baying Galo crowd, ex teammates and fawning directors. Bernard’s head was tousled lovingly in his Belo Horizonte womb. Ex team-mate Luan bumped fists with his old amigo every time their paths crossed during the match and he received a very fetching memento from club director Rodolfo Gropen before kick-off.

But while the doting birdsong of “Olé, olé, olé, olé, Bernaaaaard, Bernaaaard” rang out from the stands, Shakhtar coach Mircea Lucescu was cursing his number 10 from inside the dressing room. Lucescu and Bernard have formed a very uneasy relationship since Bernard moved to Shakhtar in August 2013. The diminutive Brazilian trickster is a player that favours the velvet glove. He played his best football under the admiring tutelage of Cuca at Galo. He was similarly blessed for the Seleção, where managers don’t come much more avuncular than ‘Felipão’ Scolari. Under both, Bernard received the TLC that he requires to flourish.

The infamously laconic Lucescu is an altogether different proposition. The Romanian evokes an atmosphere of tough love amongst his squadron, like that of an intentionally distant stepfather. It is a chemical equation that has led to frequent explosions where Bernard is concerned. The Brazilian earned the wrath of Lucescu on Wednesday evening in Belo Horizonte when he arrived late into the dressing room for the half time teamtalk. Given that Shakhtar were trailing 3-0 at the time, the Romanian was not in a forgiving mood. Yet it is custom in Brazil for players to be interviewed as they egress the pitch for the half time break. Bernard was obviously going to be a man in demand for the local press. His presence was pretty much the reason that the fixture was happening at all.

Nevertheless, this incident is, rather unwittingly, the symbol of Bernard’s difficulties in the last 18 months. It must be said that he appeared very reluctant to move to Shakhtar in the first place. Galo’s 2013 Libertadores triumph had thrust the pint sized winger into the shop window and a bevy of European clubs formed an orderly queue to procure his services. However, most of them were left sucking their teeth at Atlético’s asking price.  Daddy Bernard rather publicly had his son’s back and made eyes at F.C. Porto as the preferred suitor,

He wants to continue his career at a club like Porto,” Duarte told O Jogo. “He dreams of that. Bernard is Hulk’s friend, they became very close in the national squad and they talked about this. Hulk spoke highly of the club, and [Bernard] was convinced it would be a safe bet for this stage of his career.

Alas, Porto did not deem the asking price acceptable, only Shakhtar did and Bernard’s reluctance to move to the Ukraine was palpable. For all of the swooning over their returning son this week, Atlético were fairly ruthless in their management of the transfer. Once Galo president Alexandre Kalil saw the colour of Shakhtar’s money, he did not give his beloved son the liberty of choosing boarding schools. The whispers from the, admittedly Galo simpático, local press suggested that Bernard would rather have stayed in Minas than joined Donetsk. But once Kalil had the cheque in his paws, there would be no relinquishment.

Bernard’s doubts over the move quickly fomented when civil unrest broke out in Donetsk. Shakhtar work very hard to incubate their Brazilian contingent, but it was clear from the outset that attempts to aid Bernard’s acclimatisation were not reciprocated. Every interview he granted was a flimsily coded come and get me plea to anybody that would rescue him from his Ukrainian ordeal. Initially, Shakhtar were patient with Bernard, even though his form was, at best, indifferent during the 2013-14 season. Lucescu is not a coach renowned for his patience or his taciturnity. When Bernard returned late from the World Cup last summer, the Romanian went public with his frustration.

The way he behaves is not normal, it has no explanation. In 40 years of my coaching career I have never encountered a situation like the one I’m having with him. We parted with Bernard on May 15, after the Cup final (Ukraine). It has now been nearly three months since we have seen him.

Lucescu sneered, “He is a player more for social networks,” and Bernard, rather fittingly, responded incandescently via his twitter account, “3 months? It has been one month since the Copa. You need a maths class!” The relationship between the two has taken on the appearance of an open mic rap battle, every time one of them gets near a microphone, they trade insults. Last week, Luscescu again preached from his media pulpit, “Bernard just cries all the time. He only came here for money,” before extolling the virtues of some of Bernard’s Shakthar compatriots.

In the aftermath of the 2014 World Cup, Brazil was a team that stood accused of over emotion. Thiago Silva’s mini breakdown during the penalty shootout with Chile and the constant sobbing during the national anthems became mawkish momentos of a team on the precipice of emotional breakdown. Bernard escaped this public charge. His most notable contribution to the tournament was to execute a passable impression of a lost mascot in the 7-1 demolition against Germany. Yet he too is a player that allows his heart to govern his actions on occasion, which stands contrary to Lucescu’s preference for obedient foot soldiers.

The writing was perhaps on the wall in Bernard’s tragi-comic final appearance for Galo in August 2013. Atlético were being held at Independência by a stubborn Atlético Paranaense side. On 83 minutes, Bernard finally broke the deadlock with a typically emphatic finish.

It looked as though he had achieved his fairytale ending with a late winner. Bernard had been booked earlier in the match, but he still allowed the emotion of the moment to dictate his actions. He whipped his shirt off to reveal a vest with the prevailing line of the club’s hino “Uma Vez Até Morrer” (once until death) daubed onto it.

He promptly received a second yellow card and was dismissed. The team and the stadium also became absorbed by the emotion of the moment and dropped their focus. Atlético PR ruthlessly capitalised and scored twice in the final three minutes against ten man Galo. Bernard watched on from the sidelines in floods of tears. In a matter of seconds, he had both won and lost the game for his team in his farewell appearance. It proved to be their only home defeat of the season in Brasileirão.

Talented Brazilians moving to Europe and failing through a lack of application is a well-thumbed tale. That Bernard seeks to extricate himself from his Eastern European nightmare is, by now, pretty obvious. Plenty of Brazilian players have found Shakhtar to be a useful conduit to more glamorous and storied European clubs. Whilst Lucescu fails to don the kid gloves required to handle a precocious talent like Bernard, his criticisms are not entirely without foundation. Bernard appears to have chosen recalcitrance as the weapon with which to force his exit. At his best, Bernard is a coruscating talent.

A season or two of Bernard playing with renewed vim and vigour would surely see a club from Spain or Portugal stump up for his services. Shakhtar paid a lot of money to bring Duarte to the club and they want to recoup as much of that investment as possible before countenancing a sale. On current form, Bernard does not justify the expenditure required to release him, so a frosty impasse persists. His attempts to try and sulk until his position at the club becomes untenable sits uneasily with the physical imagining of Bernard, the boy that plays at a thousand miles an hour.

This was the boy that was twice released by Atlético Mineiro in his teens due to his height, but refused to take no for an answer. On both occasions, Bernard turned up at the club’s Cidade do Galo training base and demanded another trial. His nascent career in Brazil was a triumph of sweat and industry. That his approach in Ukraine has been so contrary smacks of poor advice from his agents. The player may not have found the father figure he craves in Lucescu, but the sustenance he requires is no better served by Team Bernard, it would seem. His international career has cooled, having been completely ignored by Dunga since the copa. For now Bernard’s career is on ice as he finds himself, at both club and international level, very much in the cold.