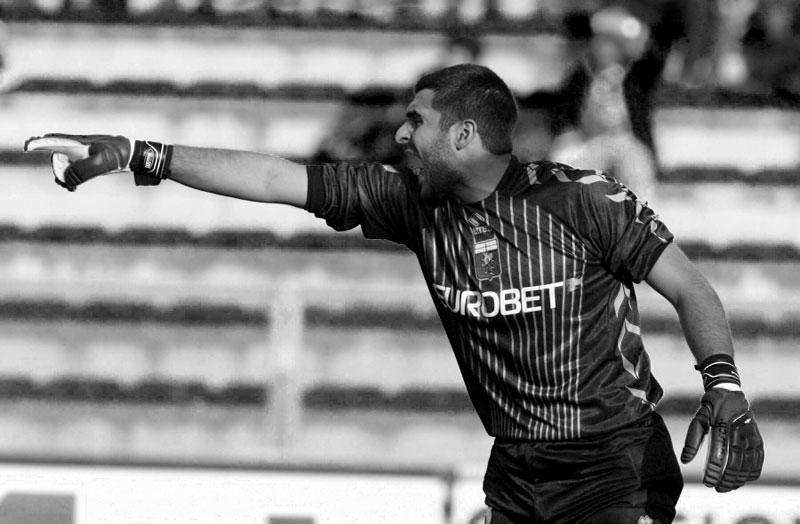 Rubinho at Genoa, for whom he made 95 appearances.

Goalkeepers are different. So wrote Brian Glanville and, as on most occasions, the wise man of football writing was right.

You have to be different to be a goalkeeper. Your basic purpose – that of stopping goals from being scored – means that you are the only one allowed to break one of the most basic rules of the game, that of playing with your hand rather than your feet.

But there’s more; goalkeepers are different because of the psychological burden that they carry. One mistake and their team is a goal down with the blame resting wholly on their shoulders. And that is if they get to play. Because, naturally, there can be only one goalkeeper in a team and coaches’ reluctance to make changes irrespective of form means that it is often frustrating for those on the outside looking in.

Indeed, there must be few experiences in professional football as challenging as being a second goalkeeper. You train, you work hard, you do your best to prove yourself to the coaches but, ultimately, you have to grin and bear it; trying to support that individual lucky enough to hold the managers’ faith whilst hoping – without letting it show– that something happens to change the situation.

For some, however, being an eternal substitute is something of a career choice. It is particularly the case when a goalkeeper moves to a big club conscious that he is better than most goalkeepers but knowing from the start that there is someone at his new club that is clearly better than he is and aware that any hopes of getting some game time will be limited. Yet they still do it.

There are many complex reasons for this. Inevitably there are many whose confidence in their ability is such that they do so because they feel that they can force their way into the team, no matter how unlikely this looks. Some feel the desire to win things, even if it is likely to be in a supporting role. And, inevitably, there are some who do so simply because they’ll be getting paid (handsomely) for watching football.

But some just fall into the role.

Among the Juventus players who will pick up a medal for winning yet another Italian league title this season there will be Rubinho, a player that even the most ardent of the Turin club’s fans would struggle to identify in a crowd. The Brazilian goalkeeper has been with the club for three seasons but the longevity of Gianluigi Buffon and Marco Storari’s reluctance to let go of his back-up role has restricted him to just two appearances. The irony of all this is that he has won more titles – three – than he has played games.

It wasn’t always that way for him. As a teenager he was regarded as the best in his country and one of the most promising in the world. In 1999, he was his nation’s hero, saving the final penalty in a shoot-out as Brazil won the World Under 17 championships beating Australia 8-7 on penalties (the game had ended in a 0-0 draw). Partly because of that save, but also because of what he had done throughout the competition, he was named as the best goalkeeper in the tournament.

The talent was clearly there but for a goalkeeper that is not enough. They need luck and they need managers to have faith in them. Rubinho initially enjoyed some of the former – he made his debut at Corinthians when first team regular Doni was suspended for violent conduct – but not enough of the latter.

By the time his contact at Corinthians came to an end he wanted an opportunity to play more regularly and felt he wasn’t going to get it at the Brazilian giants. With that aim in mind he made the move going to Portugal and Vitoria Setubal after a trial spell with Verona didn’t progress any further.

A new country, a new club and a new start but the story, sadly for him, remained very much the same. Rubinho played occasionally without ever really nailing down a place in the side. Indeed, it was much the same wherever he went; at Palermo, Livorno and Torino where various combinations of injuries, loss of form and change in management repeatedly saw him losing out to others.

Indeed, things got so bad in Sicily that toward the end of his time there his only occasional game time came as an overage player for the club’s youth sides. It was a humiliating situation for the thirty year old to be forced to play with kids more than ten years his junior and it ultimately led to him asking for the contract to be wound down.

Whilst that ended the humiliation, it meant that for the first time Rubinho was out of a job. He trained with lower league Brazilian club Gremio Braueri and then looked at the verge of joining Italian Serie B side Varese before getting the offer that no one in his position could refuse. Juventus, the freshly crowned Italian champions wanted to sign him and even though it was to be the club’s third goalkeeper by then he had enough experience of how the game went to turn down such a move.

This summer, the thirty three year old’s contract will come to an end and it is yet unclear what will happen to him. Most likely, he will start to wind down his career, safe in the knowledge that the past three years have provided him not only with enough stories to share with friends back home but also a comfortable financial cushion. Plus plenty of valuable knowledge should he eventually decide to go into coaching. Regardless of what happens next, and even though he practically never played, he will have every reason to look back favourably at these years.

Despite whatever success he indirectly contributed to, however, these were far from the glory years of his career.

That came in the mid-2000 when he moved to Genoa who, at the time had just been promoted to the Serie B. Following his career pattern he had been brought in as backup to Nicola Barasso only this time it was Rubinho who won out. Named as first choice after December, he played a key role in a superb second round that ended with Genoa winning promotion to the Serie A.

Rubinho kept his place for the following two seasons, in which they finished first in tenth place and then fifth. As with the rest of the side, Rubinho’s reputation was on the rise but he had also started suffering from a niggling hernia problem. Even so, Palermo decided to pay €5 million for him and, whilst not exactly a step up, it looked as if his career was about to take off.

Sadly, the opposite happened. Shortly after the start of the season he lost his place to a young Salvatore Sirigu and never really recovered. Which is why, at nearly thirty three, he finds himself as Juventus’ invisible Brazilian, winning league titles but without ever getting to play.

Goalkeepers are indeed different. But some are more different than others.