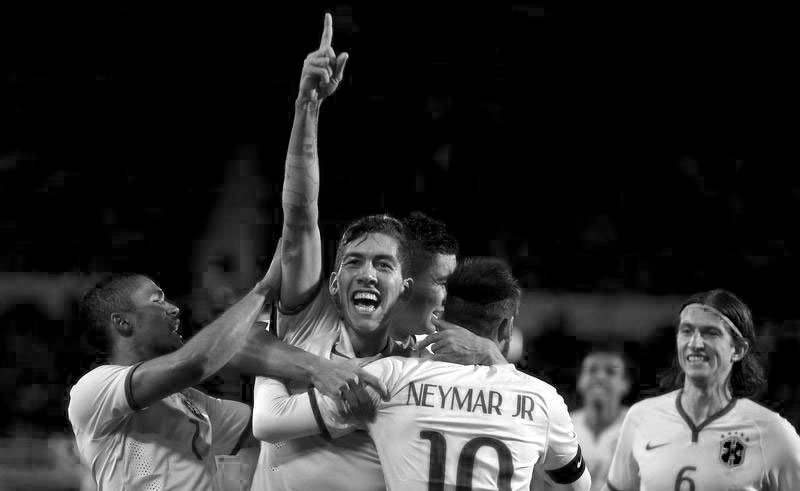 Since reassuming the reins of the Seleção last August, Dunga’s manifesto has contained two over-arching promises, both designed to clear up the mess of the previous administration, as manifestos are wont to do. Firstly, to expunge the memory of the game now known in common parlance as “the 7-1.” Dunga has made a good start with a perfect set of friendly results, but the Copa América in Chile would be the first proper band aid to dress this weeping wound. His second priority is to reduce his team’s dependence on the impish genius of Neymar Junior.

The talent and profile of Neymar has gone some way to masking one of Brazil’s foremost problems from the eyes of the world. Beneath the stereotypes and the glossy nike adverts, Brazil are struggling to produce skilful, creative players. Back in March, Dunga acknowledged this issue rather bluntly (Dunga is rarely anything other than forthright):

“What is happening in Brazilian football is that we used to have players who scored a lot of goals in Europe and who were points of references, but we no longer have players like that nowadays.

“We used to have players like Careca, Ronaldo and Rivaldo, but countries like Portugal and Holland now produce those kinds of players. We do not have any players who are really making waves. We only have Neymar at the moment. This is very worrying for Brazilian football.”

With the likes of Kaká and Ronaldinho winding down their careers and the lost generation of Alexandre Pato and Ganso failing to convince on a consistent basis, Brazil’s national side has become The Neymar Experience. Despite handing the captaincy to his talisman, Dunga has been keen to try and share the load in an attacking sense.

But even in lieu of quality options, it is a more difficult task than it looks. Neymar does not really have a fixed position in Brazil’s front line, he has license to roam wherever and whenever he wants. In his younger days, he was used in the floating left sided role that he has since made his own at Barcelona. For the seleção, Neymar is not really a number 9, a number 10 or a number 11 but an elastic hipped hybrid of all three. This can create issues as the team’s other attacking planets can have trouble orbiting Brazil’s most prominent sun.

Because of his drifting, troubadour role, it is troublesome for him to partner a traditional centre forward, as Fred found to his cost at last year’s World Cup. Whilst not in the classic, sepia tinted tradition of canary shirted number 9s, Fred is a much better striker than you think he is if last summer’s Copa was your only prolonged viewing of him. He is a poacher very much in the Inzaghi mould and he and Neymar coexisted rather more easily when the waifish Barcelona man was drifting in from the left hand side. From here, Fred was a focal point and he and Neymar were able to combine.

When Scolari gifted Neymar a more central role, Fred looked rather more listless and, more often than not, just got in the way. This perhaps explains why a resurgent Leandro Damião has only made the standby list for Dunga’s Copa América squad. Neymar’s license to drift can make it precarious for him to strike up a relationship with a true number 10. The irony here of course, is that Brazil’s captain has himself had to negotiate this tactical contretemps with Lionel Messi at Barcelona. He has succeeded resoundingly.

Dunga’s first solution was to play Diego Tardelli as a ‘false 9.’ It yielded impressive results with Tardelli scoring both goals in their October friendly win over Argentina. Tardelli is something of a wanderer too and he looked to have formed an uneasy, yet functional chemistry with Neymar, the two often passing each other like bees buzzing around a corn field.

Scolari had briefly flirted with this option himself when he called up Robinho in late 2013, but he quickly discarded the idea. Dunga hardly needs recourse to invite teacher’s pet Robinho around for tea and crumpets, so the Santos man has been recalled to the squad. His presence both an indicator that Dunga is still fond of the idea of a ‘false 9’ and a stark reminder of Brazil’s impoverished creative options. (Kaká is on the standby list for Copa América, which rather labours the latter point).

The crux is that Brazil aren’t just looking for a good attacker, they’re looking for one that can march to Neymar’s beat. The brief is to help him when necessary, but stay out of his way when appropriate. Ganso was able to execute this role to perfection in Neymar’s Santos days, the two forming a formidable partnership.

Tardelli’s injury for March friendlies against France and Chile forced Dunga to explore different options and this is where the stock of Roberto Firmino has risen exponentially. Three substitute appearances have generated two goals and an assist for the Hoffenheim player. A player previously more famous for his Instagram exploits has enjoyed a breakout season in Bundesliga, reportedly attracting attention from the likes of Liverpool, Bayern Munich and Manchester United.

If the role of Neymar’s butler is up for grabs, then Firmino has shunted himself to the front of the queue. Firmino famously has a German malapropism mistakenly tattooed onto his neck. But his lack of personal rigour does not seem to spill onto the football pitch, where he plays with a cunning mixture of imagination and intelligence, both of which are crucial requirements to the role he seeks in Neymar’s backing band.

He is perfectly capable of playing as a ‘false 9’ or in a more traditional enganche role. The issue for him now is one of profile; his talents are becoming as visible to the watching world as his body art. He is already being linked to a big money move and this sort of transfer double entendre is likely to intensify during Copa América.

Should Firmino’s interest in more glamorous environs be piqued, the tournament in Chile could well become something of an audition. In club and international terms, he could go some way to elevating his status. At the same time, he will have to be minded not to get carried away with the attention. Brazilian football is littered with the obituaries of players that could not negotiate that precarious task. (*cough* GANSO *cough*) Increased attention could become an issue on the pitch as well, if indeed Dunga decides to start Firmino, the element of surprise he has enjoyed from the substitutes bench will be lost.

He will need to demonstrate that he can play consistently throughout 90 minutes. He has 6 goals and 9 assists in 32 Bundesliga appearances this season, which are respectable numbers. However, his pass success average is 72% according to whoscored.com. Even allowing for the more adventurous passing demands of his position, that is quite profligate and Dunga would demand an improvement on those numbers in a Brazil shirt.

Firmino has an opportunity and a challenge before him to announce himself on the world stage over the coming months. He could certainly go some way to chiselling out his niche in Dunga’s starting eleven.