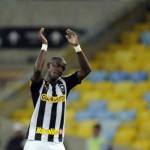 Botafogo stormed to a 3-1 victory over Coritiba at the Maracanã on Thursday, with two goals from débutant Hyuri Henrique de Oliveira Costa, the second of which was something a bit special, as you can see in the video below. Rafael Marques opened the scoring, before passing the limelight to former Audax Rio forward who only signed for Botafogo a couple of months ago. His chance in the first team came thanks to the recent sale of […]