O Clássico Mineiro is always a huge fixture for the city of Belo Horizonte and its two football titans –Atlético Mineiro and Cruzeiro – and this game was no different.

Local bragging rights aside, this match was of pivotal importance for both teams, who needed to claim maximum points to keep their contrasting hopes for the season alive.

Naturally, this atmosphere, and the 43,000 fans packed into the Cruzeiro-blue drenched Mineirão, would only heighten the atmosphere to a fever-pitch, as memories of their last meeting in the league from June – a 3-2 Cruzeiro victory where a total of 11 yellow cards and 4 reds were shown – were fresh in the mind.

Atlético came into the weekend 3rd in the table trying to chase down leaders, Palmeiras, who extended their lead atop the table by defeating Corinthians 2-0 on Saturday afternoon, whereas, by contrast, Cruzeiro were languishing perilously close to the relegation zone in 15th, only 2 points ahead of Figueirense in 17th.

The opening minutes of the match hinted towards a scrappy, cagey affair, with neither team able to put their stamp on the game. This did not last for long, however, as after around ten minutes, it suddenly sprang into life. 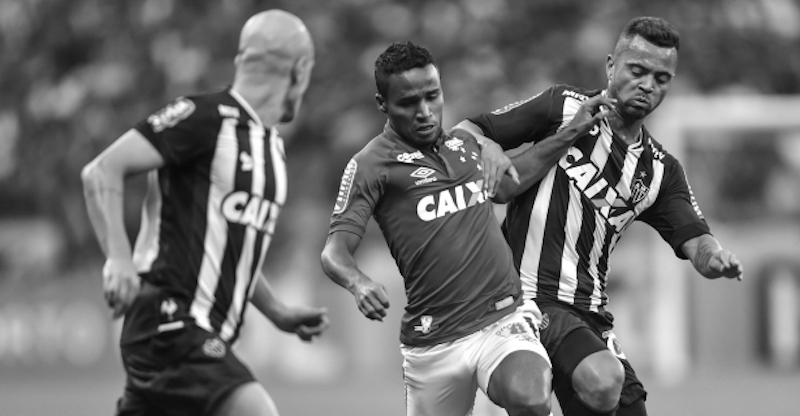 Robinho, formerly of Manchester City and Real Madrid, now of Atlético, began to show flashes of the immense talent that led him to be such a hot commodity in Europe earlier in his career.

A moment of brilliant close control and dribbling from the diminutive forward allowed him to evade four Cruzeiro players with ease and led Galo on to mount their first real attack of the game, which culminated in the even-more-diminutive-winger Rómulo Otero rattling a powerful right-footed drive against the crossbar from 20 yards.

By this point in the match Atlético were certainly in the ascendency and a goal looked likely, yet a number of chances went begging.

A particularly good opportunity was wasted by former Seleção striker Fred, whose volley from inside the area was well blocked by Cruzeiro centre-half Bruno Rodrigo.

The goal did, however, come soon after. After a spell of pressure down the right-hand side, another series of crisp, incisive and direct passing from Atlético Mineiro found left-back Fabio Santos in acres of space on the left of the Cruzeiro box.

His pinpoint cross found the impressive Clayton, who had ghosted past his marker at the back post to make it 1-0 in the 31st minute.

Going in at the break after an exciting first half, a sense of frustration was clear among Cruzeiro players and fans alike. Despite being a goal down, Cruzeiro had arguably the best two chances of the half.

The first fell to the completely unmarked Giorgian de Arrascaeta, who blazed a header over the bar from six yards out, and the second was squandered by a similarly completely unmarked Ramón Ábila, who shot wide after struggling to get the ball out of his feet when the ball fell to him six yards from goal after from a deflected Rafael Sóbis shot, much to the crowd’s anguish.

Both teams began the 2nd half strongly; the game became exceptionally open and the action flowed seamlessly from end to end, with Fred failing to gather a probing Robinho through-ball proving to be the most clear-cut of the early chances.

As Atlético’s attacking focal-point, Robinho, began to drift into anonymity in the second half before his eventual substitution (just as he had done after his 10 minutes of dominance in the first), Atlético’s forward threat began to wane and their play on the ball became increasingly slow and ponderous.

Seizing the initiative, Cruzeiro began to threaten on the counter-attack and came painfully close to notching an equaliser after yet another deflection fell to Ábila, whose left-footed shot from a narrow angle inside the six-yard box struck the post and bounced clear.

Just when the fans in blue couldn’t take any more near-misses and half chances, their eleven on the field finally repaid their patience.

After 75 minutes of waiting for the breakthrough, a searching ball from Arrascaeta found Élber on the right wing, who beat his man to the by-line and pulled the ball back to the other Robinho in the game, who rifled his first-time shot into the net, sending the blue half of the city into pandemonium.

If the first ten minutes of the second half were up-tempo, then the last ten were frantic, as both teams raced up and down the pitch in search of a dramatic late winner. However, neither side were able to produce anything of substance.

The only thing missing from this edtion of O Clássico Mineiro was a red card, which was dutifully awarded to Cruzeiro’s Lucas Rios in the 90th minute and put an end to the game’s exciting finish.

Despite a highly entertaining 90 minutes of football, the result – a 1-1 draw – was not ideal for either team.

Atlético Mineiro lost ground on the two leaders, Palmeiras and Flamengo, who both notched 2-0 victories this weekend, and Cruzeiro still precariously hover two places above the relegation zone, with their inability to convert their abundance of chances into goals sure to be a genuine worry for their manager, Mano Menezes, and Cruzeiro fans all across Minas Gerais.