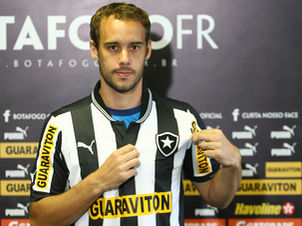 Rodrigo Defendi has completed his move to Botofogo, after training with the club in their pre season camp prior to signing.

Defendi was once on the books at Tottenham Hotspur as a youth, before moving to Italy with Udinese and Roma on loan from Spurs, and then Avelinos on a permanent basis. He had a spell at Palmeiras reserves, and then Paraná in the Campeonato Paranaense, before joining his last club Vitória Guimarães of Portugal.

He commented on signing for the club:

“It’s a huge satisfaction to play for a club such as Botafogo, and wear the shirt that several star players have already worn. I will give my maximum to each training sesion to get my place. My first impression was the best possible. He who plays in big time has to think big. Let’s play to win all the Championships. I want to stay for a long time. It will be a great opportunity, I think I’m at my peak. I am no longer a kid and I’m not old.”