At least not at the moment anyway.

Luis Felipe Scolari is now three games into his second stint as the manager of the Selecao, but he’s yet to convince the legion of Brazil fans around the world that he’s the man to take them to World Cup Glory on home soil in 2014.

A disappointing defeat against England at Wembley was followed by a more exciting, but no more satisfactory draw against Italy in Geneva, and then for the most recent game of the “World Tour” they returned to London to take part in a limp 1-1 draw against Russia at Stamford Bridge, the home of Chelsea FC.

Chelsea are a team who’ve had connections to both nationalities over the years, all the way down from their Russian owner Roman Abramovic, to their most recent group of expensive signings who incorporate a part of the future of Brazilian football .

And it’s one of these signings, Oscar, who looks to be one of the more vital cogs in the new Brazilian wheel as it rolls on to Rio. Himself and Neymar will hope to provide the creative spark in the team, but for the past few games they’ve been stifled by ex-Chelsea boss Scolari’s insistence on shoehorning a member of the old guard into a more prominent position on the side. At Wembley it was Ronaldinho taking centre stage and ultimately failing – epitomised by his penalty miss – and at Stamford Bridge it was the rejuvenated Kaka, who at least seems to have found fitness if not form. The latter looks like he could be useful to the side, but definitely not at the expense of Oscar as was the case last night. 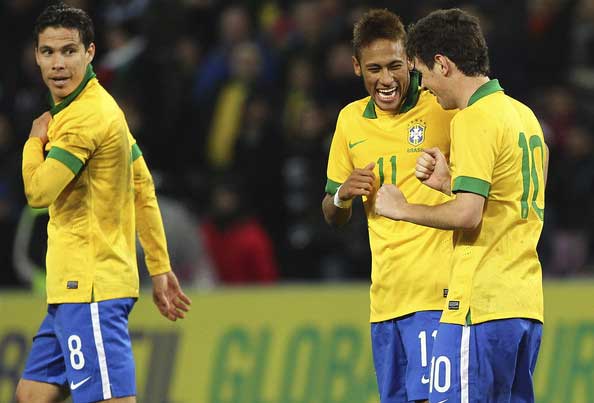 Oscar was pushed out to the right which gave him a more limited scope of passing than he has when playing from the left, where he can add more directness and probing to the play with his right footed passes inside to dangerous areas. On the right he’s limited to passes into wider channels, short sideways or backwards passes, or less measured crosses which can often be no more than hit and hope.

Two players who have stood out for Brazil over the past couple of games are holding midfielder Fernando, of Gremio, and his more forward thinking partner in the middle of the field, Hernanes.

Fernando has taken up a position for which the Brazil side have no shortage of suitors. The Volante role will be as vital to the team as creativity and goals if these latest purveyors of the jogo bonito are to be successful. Fernando has the athleticism, tenacity, passing ability, and an unhurried comfort on the ball which could see him become a part of the world cup squad.

Hernanes has been playing as the second of this deeper lying pair, the segundo volante as they are known, and has been showing his own skills on the ball as well as a good range of passing with both feet. He’s impressed many of his admirers who’ve been calling for him to be in the national team more regularly, and he’s done well in the game’s he’s played, but Brazil need a player in this position who can do more than simply play well.

In the game against Italy his passing was sound as you would expect, but his decision making in the final third was poor. He was often shooting when a pass to a team mate may have been a better option, or passing wide when a ball through the middle might have lead to something more dangerous. If Brazil are to improve they need to create more chances from all areas of the park, and the decisions made in the centre of the park need to be the right ones, especially if they’re playing a swift counter attacking style. A player such as Hernanes needs to step up to be one of the stars of the side along with Oscar and Neymar, and there’s no doubt that the Lazio man has the tools to do so…

…and that last sentence could sum up a lot about the situation the Selecao find themselves in at the moment. The tools are there, they just need to find the best way to use them. Is Big Phil the man to do this? Only time will tell, but we’ll learn a lot more over the coming months when Brazil play a couple of games in South America against Bolivia and Chile, minus their European stars, before the return game against England in Rio.