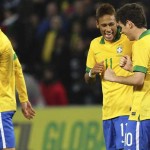 At least not at the moment anyway. Luis Felipe Scolari is now three games into his second stint as the manager of the Selecao, but he’s yet to convince the legion of Brazil fans around the world that he’s the man to take them to World Cup Glory on home soil in 2014. A disappointing defeat against England at Wembley was followed by a more exciting, but no more satisfactory draw against Italy in Geneva, […]