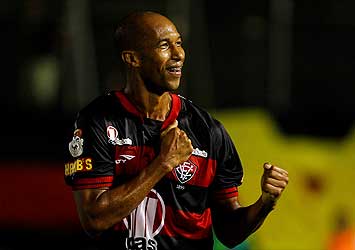 Round three of the 2013 Brazilian championship was overshadowed somewhat by the game between Brazil and England at the Maracana, but there were a few games in the league which were well worth watching, and a welcome respite from the much hyped international match.

The early games of the round saw Botafogo seize the initiative, as they beat Cruzeiro 2-1 at home with Lodeiro scoring twice. Flamengo drew away to Atletico Paranense with both teams scoring two, and Santos drew at home to Gremio.

A Dinei double gave Vitoria an impressive 2-0 victory at home to a struggling Vasco da Gama, who weren’t helped by some dodgy offside decisions which ruled out two of their goals.

Elsewhere Bahia travelled to face Internacional and came away with a vital 2-1 win. They’ll be looking to keep attacker Ryder for a little bit longer, as his golaco (see video below) set the tone for their win.

Rafinha seems to be getting the nod when it comes to Flamengo’s latest group of wonderkids, as he’s the one making the appearances from the bench, as the much hyped Adryan and Mattheus await their chance.

The aforementioned Ryder will be worth keeping an eye out for. He’s currently on loan from Fiorentina at Bahia, but they will be hoping to keep hold of him for at least the rest of the season.