Brazil U17’s journey in the UAE came to an end as they exited the FIFA U-17 World Cup, after losing on penalties to a well organised Mexico side. 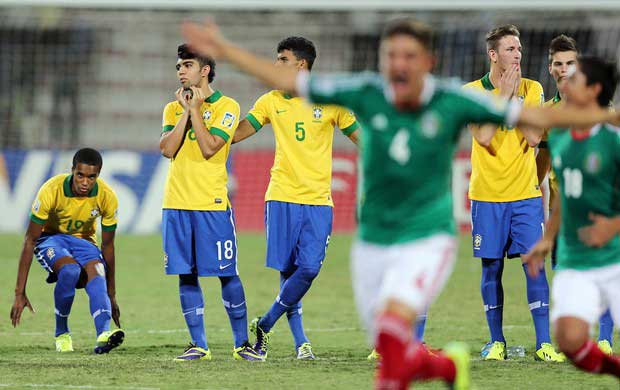 Brazil had much of the possession in the game but couldn’t break down a Mexico team who had their fair share of attacks on the counter, and troubled the Brazil goalkeeper more than any other team in the tournament so far.

Brazil hadn’t been tested much in the competition so far, as they cruised through their group matches, and eventually overcame a stubborn Russia side in the first knock-out round once their opponents were a man down.

This was their first real test, and one which they ultimately failed, but there are plenty of positives which can be taken from this experience, and a few players showed glimpses of what they might offer in the future.

Mexico opened the scoring after Brazil substitute Leo Pereira gave away a needless free kick in the corner, and the Brazil defence failed to deal with the resulting cross as Ivan Ochoa was on hand to give Mexico an unexpected, but not entirely undeserved lead.

Brazil seemed to wake up after going behind, and there was definitely more urgency about their play once the spectre of a tournament exit loomed large. They piled on the pressure and eventually scored the equaliser through Nathan, who pounced on a rebound after some frantic play in the Mexico area, volleying the ball in with his left foot.

Leo Pereira hit the bar from a corner late on in the game, but this one was to be decided on penalties, as there is no extra time in this youth tournament.

The ensuing shoot-out saw some poor penalty taking, but equally sloppy goalkeeping which led to a long drawn out affair, with both ‘keepers scoring, and Brazil right back Auro going down injured after scoring his spot kick. The role of penalty villain was handed to Mosquito, as he missed his penalty the second time around, but Gabriel had previously missed his kick which would have won the game for Brazil.