Last night Brazil suffered another youth tournament heartbreak at the hands of Mexico, as they were beaten on penalties in the FIFA U17 World Cup quarter-final. Despite this disappointing loss, there are a few players who shone throughout the tournament for Brazil, and if they can learn from this defeat rather than be disheartened by it, the premature tournament exit could even be advantageous to them.

The game against Mexico was Brazil’s first real test in the tournament, but the side never really got going and only woke up after Mexico took the lead in the second half. If a young Brazilian is to convert his footballing talent from mere potential to something more substantial, then these are the type of lessons they need to take on board.

Rather than think they’ve made it just because they’re selected for the under 17 side, they need to carry on working until they reach the top, as Neymar, Oscar, and many before them have done. There are hundreds of talented footballers playing at youth sides in Brazil, but only the ones with the right mentality and professional attitude will make it any further, unless they’re extraordinarily talented.

Here are a few of the players who caught the eye for Brazil during the 2013 FIFA U17 World Cup. 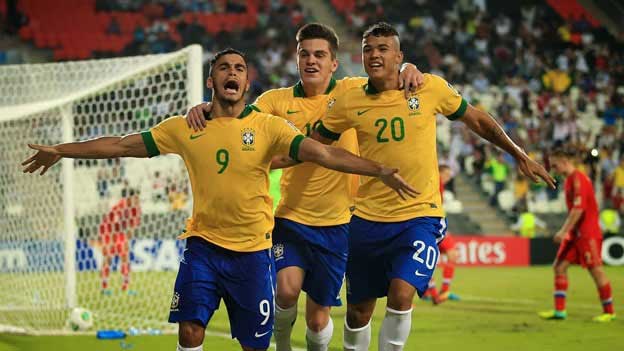 Mosquito, Nathan & Kenedy were amongst the most promising players in Brazil’s U17s side.

The comparison here is an easy one. Auro is an attacking right back who plays more like a winger, and one who will spend more time supporting the strikers than he will helping out in defence. That said he did show a willingness to get his foot in when Brazil were pressing high up the pitch during the matches they dominated earlier in the tournament. But he’ll always be one of those defenders whose defensive qualities are questioned because of the advanced positions he takes up, regardless of how good he actually is at the defensive side of the game.

At his best he showed great technical skill and a willingness to dribble the ball into the box before squaring the ball back to a forward. If you hadn’t guessed yet, he’s the new Daniel Alves.

The Brazil U17s number 8 showed an ability to dictate the tempo of games, and displayed a good range of passing from his midfield berth alongside the more defensive Danilo. Brazil’s most promising attacks often started at his feet, as he planned the direction of his side’s next attacking move by offloading the ball to the best positioned attacking player.

He’s also willing to drive to the edge of the box once he’s performed his role as a distributor, and whilst he’s not quite a Paulinho in the attacking sense, an increased sense of timing when going forward could lead to him becoming a dangerous box-to-box midfielder in the future.

He was suspended for the defeat to Mexico along with Boschilia, and though it’s an easy conclusion to arrive at, his absence may have led to the slightly more ad hoc approach to Brazil’s attacking play in their quarter final defeat.

Boschilia was probably the stand-out player for Brazil in this tournament, and not just because he notched up 6 goals and 3 assists in 4 games. He was the most direct of Brazil’s forwards and when he wasn’t scoring he was making runs which benefited team-mates, creating chances for striker Mosquito, and space for attacking midfielder Nathan.

He boasts the pace and crossing ability of a winger, but also the directness and goal-scoring ability of a centre forward. If his career path remains in the ascendancy he could become one of Brazil’s more promising inside forwards.

Brazil has been awash with attacking talents in recent years, but the majority of these forward thinking young stars have been attacking midfielders, support strikers, false nines, or wingers. What Brazil seems to have been lacking from its next generation is an out-and-out centre forward. This might go some way towards explaining the buzz around Mosquito.

Whilst the 17-year-old Atlético Paranaense striker may have begun his youth career as utility forward, he’s emerged as promising striker who possesses all the tools to lead the line. He’s quick of foot as well as of mind, and has shown during the recent U17 World Cup that he’s composed when through on goal. His movement in and around the box belies his age, and he’s robust enough to battle with bigger defenders.

It’s for these reasons that Mosquito is expected to be around the Brazil national team all the way up to the senior squad, and if he maintains his impressive progression through the ranks at club and national level, he’ll be knocking on the door for a place in post-2014 World Cup squads.

He possesses the dynamism of a more direct, no frills player such as Hulk, but also the stubbornness of a poacher such as current Brazil number 9, Fred. These traits along with his natural technical gifts could see him go far, but only if he can perfect the all-important mental aspects of the game, especially as he missed the penalty which saw Brazil lose their shoot-out to Mexico.

Nathan was up there with Boschilia when it came to Brazil’s player of the tournament, and once the attacking midfielder was handed the number 10 jersey, you sensed that manager Alexandre Gallo had seen something in this player which many others hadn’t. The majority expected Santos’ forward Gabriel to be starting games in this tournament, but Nathan was the surprise inclusion which may have seen the much hyped “Gabigol” dropped from the side.

The decision was entirely justified, as Nathan went on to score 5 goals and provide 5 assists in as many appearances in the tournament, and whilst he was fairly quiet in the last game against Mexico, he was the one who popped up with an equalising goal when it was required.

Nathan is a great all round footballer who, as demonstrated by the aforementioned statistics, is as adept at finishing chances as he is at creating them. Despite wearing the number 10 shirt he’s no languorous play-maker, but is more in the mould of an all-round attacking midfield schemer such as Oscar.

Best of the rest…

Gabriel made some impressive appearances from the bench, albeit against weaker opposition, as did Kenedy of Fluminense who replaced Boschilia in the final game. Danilo didn’t do much wrong but wasn’t as outstanding as he has been in previous outings at this level. Left back Abner of Coritiba was gearing up to be one of the stand-out players of the tournament before suffering a serious ligament injury, which could see him sidelined for up to 6 months. Let’s hope he can recover as he has the potential to be Brazil’s number 6 in the future.

The rest of the defence didn’t get much chance to shine, or didn’t take their opportunity to impress when it came, but Ciao of Flamengo, and São Paulo’s Joanderson showed that Brazil have great depth when it comes to their attacking options.

Full Brazil squad & statistics from the 2013 U-17 World Cup, as compiled by FIFA