Last week can only be described as ‘bittersweet’ for Flamengo fans all over the world. On Wednesday, Flamengo lost to Mexican side Léon in front of almost 60,000 fans at the Maracanã, and were eliminated at the group stage of the Copa Libertadores.

Sunday, on the other hand, saw Flamengo draw 1-1 with arch-rivals Vasco da Gama thanks to a controversial goal scored in the 91st minute, which saw them win the State Championship for the 33rd time in their history. The bittersweet feeling comes from the fact that most Flamengo fans would rather have seen the team progress to the knockout stage of the international competition, than see the team win another state championship, which in recent years has become something of a burden to most big clubs in the country. 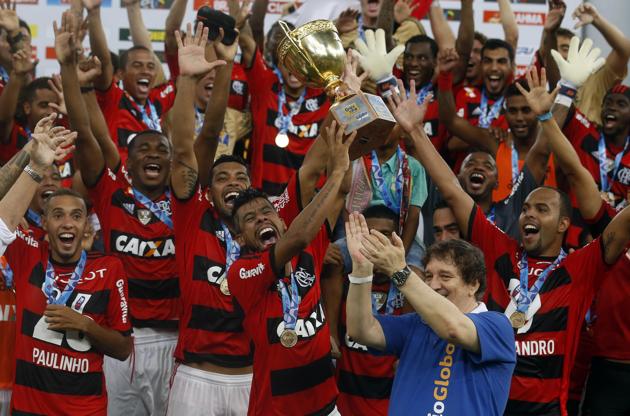 In the local Carioca state league, things were much easier as the adversaries were far weaker, with the only defeat in the whole competition being the 3-0 loss to Fluminense. Often playing in stadiums which held at times less than a thousand people, Flamengo’s victorious state campaign should not be seen as a sign that things will go smoothly in the national league.

There were moments against some teams in the State Championships, and especially in the Copa Libertadores, when Jayme de Almeida’s team seemed more like a bunch of individuals than a cohesive unit. The transition from defence to attack was, in many cases, poorly executed, and the team often struggled to find any space against the more organised defensive lines.

The team still hasn’t got used to playing without Elias, last season’s most important player, and with the temporary loss of Luiz Antônio, they had to replace two defensive midfielders with Muralha and Cáceres, who were far from impressive.

Of the new players, only winger Éverton and forward Alecsandro look like positive acquisitions. Erazo is only the fourth option at centre back, Elano is plagued with injuries, Márcio Araújo lacks the finesse of Elias, and attacking midfielder Mugni alternates his good moments with times when you can easily forget he is on the pitch. Léo has a little more to prove if he wants to replace the experiences Léo Moura at right back next season.

On the bright side, two of Flamengo’s younger players seem to be improving by the day. 24-year-old attacker, Gabriel, had a great start last season but couldn’t maintain it. This season he seems to have improved wildly, and has been one of de Almeida’s most used players so far. Centre back Samir, who also appears to be improving exponentially with each minute spent on the pitch, could attract bids from big European clubs if he keeps up this progression.

Economically, Flamengo will try to take advantage of having the biggest fanbase in the country, and will host some matches away from Rio in order to cash in on their nationwide support. Although this strategy might be lucrative, it might also hamper the team’s preparation in the long run.

Trying to predict the outcome of the Brazilian league can be a thankless task, and one which often leaves us staring at the league table, baffled by how could some teams perform so well and others so poorly. Thoughts such as, “how could anyone have guessed that a team that was almost relegated last season would end winning it”, and vice-versa, being all too common. Expect Flamengo to be anywhere from 3rd place to 8th place!

Although the team is not brilliant, Flamengo appear to have a squad depth which few other teams can boast (Botafogo being a prime example). With the three strongest teams in the country still fighting for the Libertadores, and the big teams from São Paulo performing way below expectations, the optimistic Flamengo fan believes that the team will manage to qualify for the Libertadores next year, either with a top four finish or a Brazilian Cup win. The pessimist believes that, in the end, they’ll just be a midtable team. Hoping that Flamengo finally win their seventh Brazilian title is unrealistic, as is imagining a season where we struggle against relegation.