Current Gaucho champions, boasting all the merits and authority which they defeated fierce local rivals Grêmio, Internacional now have a challenge ahead: the Brasileirão. 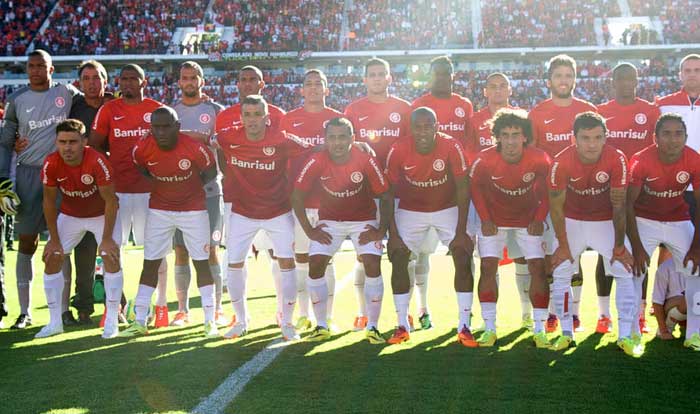 In 2013, under the command of Dunga, the scenario was similar:. Hopes for the title and a successful league campaign, it was to be the year of the Inter. But it wasn’t. Again.

The campaign last year was vexatious, with the club suffering risking relegation until the final round of games. This season’s Brasileirão squad might be unrecognisable, with only three familiar members remaining in the team: Fabricio, Williams and D’Alessandro. Juan lost his position to Ernando, and he can leave the club during the break for the World Cup as his contract expires. Muriel lost his place to Dida, Rodrigo Moledo, Fred and Leandro Damiao were sold, while Airton and Diego Forlan were released.

All these changes mean a change in mentality. The club let the stars aside and focused their attention on less heralded players, in favour of a stronger team unit. The team also changed technically and tactically. The 4-1-4-1 proposed by Abel Braga is clear: transition and possession, quick ball movement, aggressiveness, and switching flanks.

Dida; Gilberto, Paulão, Ernando, and Fabricio.
Abel Braga bet on the physical strength of Paulão, and the speed and accuracy of Ernando for his defensive pair, and Together they conceded just 2 goals in his last 5 games. At right back and left back Colorado gains the services of Gilberto and Fabricio. As is often the case with attacking full-backs, their defensive marking can improve, but the duo have excelled offensively, scoring six goals – five for Fabricio and a single goal from Gilberto.

Williams, Aranguiz, Alex, Alan Patrick, and D’Alessandro.
Perhaps the strongest point of the team. Forget that Williams brought a disorder to the attack last season. A player in his defensive midfield guard position gives freedom to the likes of Aránguiz & Alex, so they can supply Alan Patrick and D’Alessandro. These last two players alternate positions frequently.

Rafael Moura
When Abel Braga was announced as manager, he declared to his confidence in Rafael Moura. He believed that the striker could remember the times when he was top scorer at Fluminense. The coach was right. He already has nine goals in 2014, and has put in some outstanding performances, especially in the clashes against arch-rivals, Grêmio.

Certainly the best signing of the season so far. ‘Principe Aránguiz’ quickly became a key part of Inter’s tactical set-up, with his quality on the ball, good passing, finishing, and general dynamism in midfield. For the success of the club during the season, his presence is essential. The Chilean belongs to the Granada and Udinese conglomerate, and Colorados are already negotiating a definitive agreement. Aránguiz has 4 goals and 6 assists in 10 matches.

Abelão doesn’t often favour younger players, but it’s worth paying attention to promising right-back Claudio Winck. He got his chance in the first team during the state championships, and could be used in less difficult games in the national league this season.

Colorado has a very few names who will push for first team places from the bench, but Jorge Henrique and former West Ham forward Wellington Paulista could feature. The team has a very good starting 11, but still lacks depth, especially in attack. Dreams of a title win may once again be far-fetched, but a return to the Libertadores is possible for International.