There’s a catchy song doing the rounds on Brazilian TV which has a chorus – “Mostra tua força Brasil” – which translates as “show your strength, Brazil”. During last night’s game, they might have taken this show of strength too far for their own good. 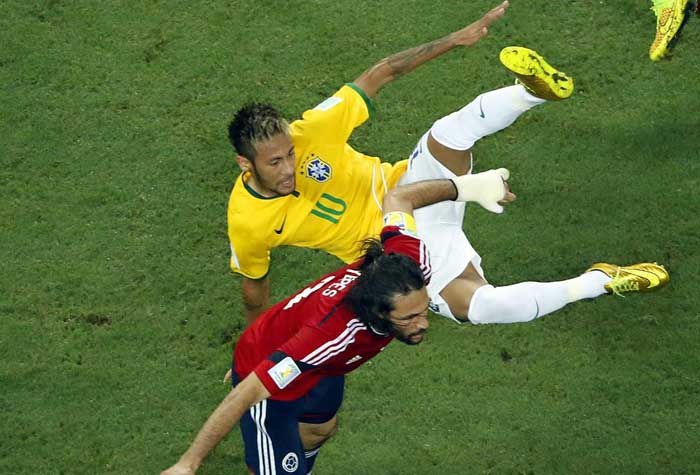 Neymar in action during Brazil’s quarter-final battle versus Colombia.

The Seleção’s quarter-final against Colombia will be remembered as the match which saw Neymar’s World Cup come to an end. The much talked about “poster-boy” of Brazil suffered a knee to the back from Juan Zuniga which ended his game and his tournament, as Brazil lose the player around whom their attack is built.

Luiz Felipe Scolari has said that Neymar was “hunted” for much of the tournament, which is understandable when many teams will have been thinking that if you stop Neymar, you stop Brazil.

The game in Fortaleza was set to be a battle between two of the World Cup’s shining stars. Both 22-years-old, James and Neymar were the once precocious talents who are now fulfilling this potential on the world stage, but neither were allowed to do so in this vital match-up.

Brazil’s physical midfield duo of Paulinho and Fernandinho set out to nullify James from the start, using any means necessary. The performance of the referee in the first half, as he failed to book players on either side for fouls which on another day would have been certain yellow cards, meant that Brazil could use their strong-arm tactics to lessen Rodriguez’s impact on the game.

Brazil were targeting James, as their own opponents target Neymar. This is part of football whether we like it or not and if the referee lets it happen, as Brazil so often complain is the case, then it will happen.

Fernandinho especially, showed a physicality and dynamism in the number five role for Brazil which they might not have had from the absent Luiz Gustavo. His constant niggling away at James and the rest of Colombia’s attack could have seen him pick up multiple yellow cards in the first half alone, but the referee kept them in his pocket.

It was questionable as to whether he even brought his cards onto the pitch in the first half as cynical challenges flew in from both sides, setting the tone for the game.

Thanks to the referee, the game turned into a battle of attrition rather than one of football, and this suited Brazil down to the ground until around the 87th minute. The roughhouse tactics instigated by Brazil eventually came back to bite them, as their star man was carried off the pitch and transported straight to hospital to discover his saddening fate, whilst Juan Zuniga remained unpunished for the challenge.

The referee’s failure to take control of the game in the first half ruined this game for the football purists, and now he might have ruined the World Cup from both a Brazilian point of view, and from the point of view of those romantic neutrals who wanted to see Neymar’s star shine in the famous Maracana. He may have been scared to book players as a result of the harsh two yellows = game ban rule imposed by FIFA, but his lack of authority saw the deterioration of the football on show in this game. It was only a matter of time before the body of James or Neymar could take no more.

Unfortunately for Brazil it was the latter who suffered, and we now face the disappointing, but intriguing prospect of a Neymar-less Brazil in a Belo Horizonte semi-final versus Germany on Tuesday. Brazil and Scolari will complain, and maybe have every right to, but it could just as easily have been James Rodriguez spending the rest of his summer nursing a serious injury.