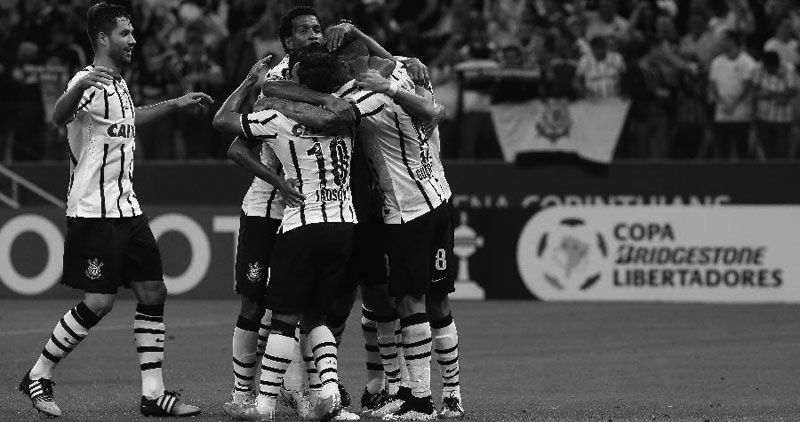 Corinthians’ players celebrate a goal against Danubio, in the group stages of the 2015 Libertadores.

Corinthians, São Paulo, Internacional, Atlético Mineiro and Cruzeiro all emerged from the group phase of the Copa Libertadores unscathed. Some qualified with greater ease than others, Tite’s Corinthians consummately sailed through the ‘group of death.’ In contrast, Galo, who really ought to fit their supporters with pacemakers as standard, qualified by the skin of their teeth. The main obstacle to a Brazilian club snafuing this year’s Libertadores comes mainly from Argentina, specifically Boca Juniors, who qualified from their group with the maximum 18 points and an intimidating goal difference of +17.

At least two Brazilian sides are not longed for the quarter finals, with São Paulo and Cruzeiro facing off in the final 16, whilst Atlético Mineiro play Internacional. Corinthians have been installed as favourites for the tournament alongside Boca Juniors. Brazilian clubs are beginning to hit their stride as the estudais blend into the beginning of the Brasileirão. The likes of Cruzeiro, Inter and Galo are starting to settle after enduring a high turnover of players. I took a look at how Brazil’s five contenders are shaping up as we head into the last 16.

Whilst some idiots predicted that Corinthians would struggle in the group of death, Tite’s side eased through to the knockout rounds and subjected the remaining contenders in Group 1 to an unholy scrap for second place. O Timão aren’t always the most captivating side to watch, but their manager sure knows how to get results in this competition, having won it with the São Paulo giants in 2012.

They won their first four encounters in Group 1 and only took their foot off the gas in the final group games with qualification assured. Corinthians have shown the sort of organisation and defence doggedness one would expect from a Tite team, having conceded only one goal in the group prior to the final group game against São Paulo, which their city rivals had to win. With the incomparable Guerrero upfront, backed by a rejuvenated Jadson and an in form Elias, they have packed an attacking punch too. They scored 9 goals in those first four matches as they stormed to the top of the group.

Corinthians ought to have enough to beat Paraguay’s Guarani in the round of 16, who conceded on ten occasions in Group 8. The issue for Corinthians in the knockout phases may be one of momentum. With star striker José Paolo Guerrero hospitalised by dengue fever, their form of late has stuttered. Since their fulminating 4-0 home victory over Danubio, they have drawn 4 games (losing one on penalties to Palmeiras in Campeonato Paulista) won one and lost one, with Vagner Love failing to shoulder the Peruvian’s significant burden. Tite will need to refocus his troops, but most of all, he will need to get Guerrero fit and firing again for Corinthians to maintain their early tournament promise.

Having lost a clutch of high profile players in the off season, it is perhaps little surprise that Oliveira’s Cruzeiro have yet to match the heights of 2013 and 2014 just yet. The sales of Everton Ribeiro, Ricardo Goulart, Edigo, Lucas Silva and Nilton were always going to enervate the Belo Horizonte club’s momentum. Yet they have bought well to amend for high profile departures, the renaissance of Leandro Damião upfront has been a particular highlight for the Brasileirão campeões.

Despite a disappointing defeat to Hurican on matchday 5, their qualification from the group stage was never in serious doubt. Cruzeiro share a common thread with city rivals Galo and Tite’s Corinthians, in that their prospects will largely rest on their foremost striker. Damião has 12 goals in 12 games since signing for Cruzeiro in January, including 3 in the Libertadores group stage. O Raposta have been handed an all Brazilian affair against São Paulo in the last 16 and they may reflect that this is the opportune time to play Tricolor. They continue to search for a new manager following the recent departure of Muricy Ramalho.

Results had been patchy for them in the Campeonato Paulista where they were beaten by rivals Santos in the semi-finals. That said, Cruzeiro themselves are licking their wounds after a painful late defeat to hated rivals Atlético Mineiro at the same stage of the Campeonato Mineiro. I think Oliveira’s side will just have enough to get past São Paulo, their prospects of winning the tournament will be contingent on how well their new look team foments and upon the slender shoulders of Leandro Damião. But even whilst at their imperious best in 2014, they struggled to make their mark on this competition. Cruzeiro will be keen to amend for last year’s disappointment.

São Paulo qualified from Group 2 with 5 points to spare. However, matters looked a little more precarious on matchday 5, when a stoppage time Ricardo Centurion goal against Danubio in Uruguay gave Tricolor the upper hand over defending champions San Lorenzo. The Argentines failed to win their final two group games which gave São Paulo a more convincing cushion. Though outshone by city neighbours Corinthians, there were some promising performances for São Paulo in Group 2.

They won all three of their games at Morumbi, including a 4-0 rout of Danubio on matchday 1. However, their away form will be a cause of concern as they progress into the knockout stages. They were beaten at San Lorenzo and Corinthians and scraped a last ditch victory at group whipping boys Danubio. A stoppage time winner from Michel Bastos against San Lorenzo in São Paulo became the defining moment of the group and O Soberano have been reliant on Bastos, who registered 2 goals and 3 assists in Group 2. On paper, São Paulo have one of the strongest teams in the competition, but they are struggling to wring the best from the mercurial talents of Alexandre Pato and Ganso since Kaká packed up his bindle and took his winning smile stateside.

It is difficult to pick a winner between Cruzeiro and São Paulo, last season’s top 2 in Brasileirão. Neither team is at their best, yet neither is in an especially disastrous run of form either. Both will benefit from the breather afforded them by state championship semi-final exits. In Damião, Pato and Luis Fabiano, the game will boast some ghosts of the Seleção’s centre forward past and the fate of the tie could rest in one of their hands.

It simply would not be Atlético if they did not require a two goal win in Belo Horizonte at some point in a cup competition. It would be even more uncharacteristic of Galo not to achieve it. Reeling from the loss of Diego Tardelli and injuries to Marcos Rocha and Lucas Pratto, Atlético began their campaign in woeful fashion, losing their first two games against Atlas and Colo Colo. A pair of wins over Santa Fé gave them a lifeline, prior to a meek capitulation on matchday 5 against Atlas in Mexico. It left them needing to defeat Colo Colo by two clear goals at their Independência fortress in the final group encounter.

Impressive home comebacks were a theme of Galo’s 2013 Copa Libertadores victory- where they negotiated two goal deficits in the home legs of the semi-final and the final. During last year’s Copa do Brasil win, both Flamengo and Corinthians led Atlético by three goals on aggregate in the second leg, only to be toppled in Minas. Rafael Carioca’s late volley to defeat Colo Colo 2-0 on matchday 6 may therefore be regarded as a good omen for Culpi’s cup specialists. They rely heavily on Argentinean striker Lucas Pratto, who often seems to bully the ball into the net through sheer force of will.

Galo have been drawn against Internacional in the round of 16 and there is very little to choose between the two sides at this stage. The Gaucho club may be enthused by having been drawn to play at home in the second leg, foiling Galo’s regular Independência escapology act. Culpi’s team are formidable at home but they do not tend to travel well, so even if they qualify for the quarter-finals, prospective opponents will have this in mind. With Guilherme again injured and Cardénas struggling to find his feet, Atlético can lack creativity. This means that, much like Cornthians with Guerrero and Cruzeiro and Leandro Damião, Galo will be heavily reliant on striker Lucas Pratto’s efficiency in the area.

Few teams in Brasilierão made as much of an impression in the off season transfer market as Internacional. The likes of Vitinho, Nilton, Réver and Anderson were recruited at some expense and Inter qualified comfortably enough from Group 4. Their sole defeat came in their opening group game in La Paz against Bolivian side The Strongest. Famously, The Strongest’s home stadium is some 3,637 metres above sea level, making conditions for visiting teams some of the most uncomfortable in world football.

Thereafter, Inter did not lose a game and won all three of their home matches. That said, they probably had the weakest group on paper and it will be of concern to Aguirre that they conceded 7 in the group stage, comfortably the most of all the Brazilian sides in the competition. Of course, they scored significantly more than their compatriots too and O Colorado and showed a greater variety in their threat. Their 13 goals in the tournament thus far have been shared amongst 8 players. Though it looks as though Valdívia may miss the round of 16 tie with Galo and he would be a big loss.

Internacional tend to play Nilmar upfront (he scored 3 in the group phase), with the likes of D’Alessando, Eduardo Sasha and Jorge Henrique floating around behind him. It’s a formidable attacking square that is not over dependent on one figure to glue it together. Atlético and any other opponents Inter may face would certainly identify their defence as the achilles heel. Galo deemed Réver surplus to requirements in the off season and Pratto will believe that he can have his wicked way with the ageing zagueiro. But Inter would certainly give anybody that remains in the Libertadores a contest, particularly at the Beira-Rio.