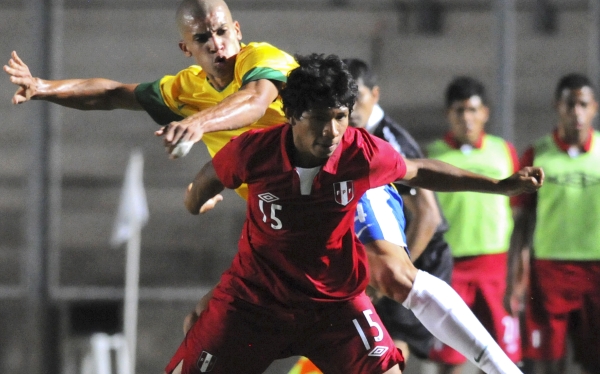 Doria battles with Peru’s Edison Flores, as Brazil are defeated 2-0 and are now out of the U20 Championships.

Botafogo’s three young stars, Doria, Bruno Mendes, and Jadson, will be retuning to the club early as the Brazil under 20 side were eliminated from the 2013 South American Youth Championships at the group stage.

The squad went into the competition with high hopes, but it was evident from the first game that the team were lacking in shape, discipline, and attacking ideas.

Doria played in all four games in this group stage, but was unable to provide a steadying presence at the back as he and his team mates were often found scurrying back into position to recover ball which had been lost further up the pitch.

Bruno Mendes made a couple of appearances in the side, but was unable to get a goal as Brazil struggled to build up any kind of attacking threat.

Jadson made a short appearance from the bench against Venezuela, but for such a tough compact schedule of matches, Emerson Avila failed to rotate his squad appropriately to keep things fresh, and encourage competition for places. Poor performers weren’t dropped, and the same poor displays were evident throughout.

Defeats to Uruguay and Peru, and a draw against Ecuador, meant that their one solitary win – which came courtesy of a Felipe Anderson penalty versus Venezuela – wasn’t enough to see the team through, and they ended up finishing bottom of the 5 team group.

The good news for Botafogo is that their young players will come home early to take part in the Carioca State Championships which kick off tomorrow against Duque de Caxias.

The early exit will also detract some of the attention on their young stars from the prying eyes of European clubs, but it seems Doria has already attracted the attention and a move to Europe is likely at some point this year. Botafogo will hope that they can get good seasons out of Jadson, and Bruno Mendes, however.