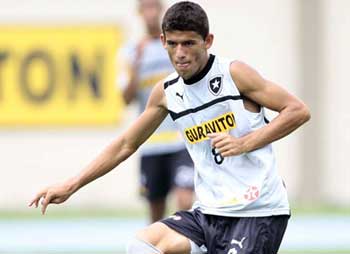 Jadson looks set to begin his European adventure at Udinese.

Botafogo’s promising Brazil U20 midfielder Jadson, is set to join the Italian club Udinese in August for a fee of around £2m.

Before he’s even had chance to feature in the stars of the future area on this site, let alone have a consistent stint in the starting XI for Botafogo, Udinese have picked up the the 19 year old for what could be a bargain price.

Jadson is a volante, or defensive midfielder, who was promoted to the Botafogo first team squad in 2012. He was one of a group of three Botafogo players who took part in Brazil’s recent miserable South American U20 Championship campaign, the other two being Doria and Bruno Mendes, and he is obviously held in similar regard to his slightly higher profile team mates. Indeed, he’s been picked up by a foreign club ahead of the much talked about duo, who have been the subject of various transfer speculation but no solid offers as yet.

As well as catching the eye of the Brazil national team selectors, Jadson was noticed by scouts from Europe and particularly Italy, where many Brazilians look to begin their career in Europe in their quest to join the elite players in world football in the UEFA Champions League. Udinese are a club renowned for their development of young players, many of who have hailed from South America, such as Barcelona’s Alexis Sanchez, Columbian defender Cristian Zapata, and ex-Roma midfielder David Pizarro, who all began their European careers in Udine. To the chagrin of their fans, Udinese are very much a stepping stone to greater things.

Jadson is a good all round midfielder whose main strengths lie in the defensive side of the game. He’s good at reading the play and spotting opposition passes, and can then use his athleticism and tenacity to win the ball back.

A typically dogged defensive midfielder, he will use his low centre of gravity to help him hassle attacking players and prevent them from having too much time on the ball. Despite not being the tallest, he will win his fair share of aerial challenges thanks to his physical attributes.

Once he wins the ball back he has the technical skill, pace, and dribbling ability to take the ball forward himself, or release one of his team mates. He is not afraid to shoot with either foot, and will shoot from distance should the opportunity arise.

His all round technical ability, coupled with an engine and determination in the centre of the park, should give him a good chance of becoming a successful box to box style midfielder in the European game.

2 Responses to “Jadson to Sign for Udinese in August”