Atlético Mineiro continued the recent Brazilian domination of the most prestigious competition in South American club football, as they defeated Olimpia of Paraguay on penalties in an entertaining Copa Libertadores final. 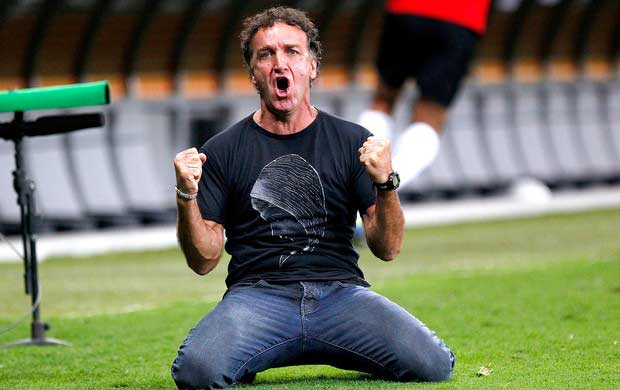 Galo needed to overturn a two goal deficit from the first leg in Paraguay, and the home fans who packed into the Mineirão (attendance 58,620) certainly gave their side a lift to claw back the two goals they needed to take the game to extra time.

Jô put the home side ahead early on in the second half with an opportunist effort from twelve yards out. The Brazil forward pounced on a missed clearance by Wilson Pittoni, and forced the ball goal-ward with his right boot.

Olimpia’s Argentine forward Juan Carlos Ferreyra has a great chance to spoil the Mineirão party when he raced through and beat a wandering Mineiro goalkeeper Victor to the ball. With Victor all at sea, Ferreyra just had to compose himself and get a shot on target, but unfortunately he slipped at the vital moment, allowing Victor to recover.

Much of the talk in the build up to the game was focused on the future of Brazilian wonderkid Bernard, but he was forced to play much of this game in deeper positions as the Olimpia back five played a defensive line so low that there was nothing for him to run in behind!

However, Bernard still managed to set up the all important equalising goal with a cross for Leonardo Silva, who’d just regained his feet having been strewn on the floor claiming a penalty for an incident shortly before the goal. The referee gestured to Silva to get to his feet, which he did just in time to see Bernard’s cross, before rising and arching above the Olimpia defenders to perform a lobbed header back across goal and into the far corner.

Olimpia had Julio Manzur sent off towards the end of normal time for two bookable offences, and this contributed to their downfall, but they still managed to hang on for a penalty shoot out, and even created a few chances of their own at set pieces in extra time.

The Atlético Mineiro penalties were converted by Alecsandro, Guilherme, Jô, and Leonardo Silva, whose names will go down in the clubs history. The latter two especially as they also scored the vital goals in normal time.

All this without even mentioning Ronaldinho, who was a big influence on this side throughout their cup run, and even when he might not have performed to the standards which have always expected of him, he was still an important factor in the team’s mentality to come back and win when required.

He joins a list of just eight players to win both the Champions League in Europe, and the Copa Libertadores in South America: