Luiz Felipe Scolari’s Brazil face South Korea at midday this Saturday (UK time), with plenty of players in the side looking to make an impression as the 2014 World Cup gets ever closer. 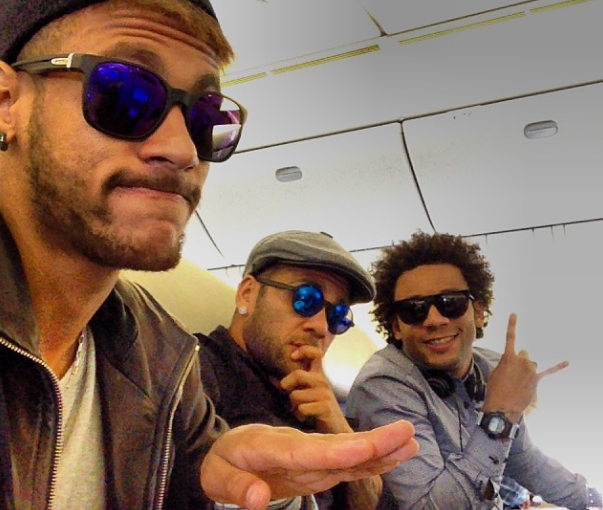 Neymar, Dani Alves, and Marcelo on the way to Asia for friendlies against South Korea and Zambia

The game will take place at the Seoul World Cup Stadium – one of the stadiums used during the 2002 World Cup which was won by Scolari’s Brazil, although they didn’t play there.

Brazil will face a South Korean side who have already qualified for the 2014 tournament, and one which should give The Seleção a stern enough test to assess where they are as a team.

Scolari has recently commented that there are several places still up for grabs when it comes to selecting his squad for next year’s big tournament on home soil, and there are a few players in this line-up who will be looking to take their chance. Here’s a look at each position, and the players who might be looking to make an impact in both this game and the friendly against Zambia in Beijing on Tuesday.

With Júlio César out of action with a broken finger, there are potential chances for three goalkeepers who currently play their football at home in Brazil. 30-year-old Jefferson of Botafogo is the favourite to take the number one shirt for these games, but there could also be chances for Victor, who recently won the Copa Libertadores with Atlético Mineiro, and Diego Cavalieri of last year’s Brazilian champions Fluminense.

Two more Brazil based players come into the side in the shape of centre back Dedé of Brazilian league leaders Cruzeiro, and another centre back, Henrique of Brazilian second division table toppers Palmeiras.

Henrique was once on the books at Barcelona, but failed to make the grade there and returned to Brazil taking in stints at Bayer Leverkusen and Racing Santander on his way back to São Paulo.

Dedé’s performances have improved of late after an inconsistent start to the season, and his run of form has coincided with his team’s 13 match unbeaten run which sees them 11 points clear at the top of the Brasileirão. He’s tipped as a future star in the centre of Brazil’s defence, and at the age of 25 it’s about time he started fulfilling his early promise.

They’ll be joined by captain David Luiz of Chelsea, and Bayern Munich’s Dante who already look certain to make the World Cup squad next year, along with the currently injured Thiago Silva, who is often talked about as the best defender in the world.

Let’s not call them full backs. Dani Alves of Barcelona, and Marcelo of Real Madrid look to be secure when it comes to a place in the squad, but the back-up players to this pair have yet to be decided.

Left back Maxwell of PSG gets the nod this time, with Maicon coming in at right back – that is until he got injured in a training session in the build up to the game! Competition for Maxwell seems to come from Filipe Luís, the Atlético Madrid left back who has enjoyed a few call-ups under Scolari and was part of the Confederations Cup squad.

At right back, Rafael of Manchester United is the favourite of many fans and pundits, but remains in out in the cold as memories of his unfortunate mistake in the 2012 Olympics must still linger in the minds of the Brazilian hierarchy. Maicon will be disappointed to be injured having just forced his way back into the fray, and Marcos Rocha’s first Brazil call up last month against Australia could turn out to be his last. Lucas of Botafogo looked to be pushing for a place until injury cut his season short, so could the door finally be open for Rafael?

Brazil typically like a disciplined, hard-working, defensive player to anchor the midfield and play alongside a more forward thinking creative partner. They are currently blessed with a whole host of options in this area, so much so that one of the best around, Sandro of Spurs, hasn’t got a look in since his return from injury.

Speaking of players returning from injury, Lucas Leiva returns to the squad on the back of some impressive performances for Liverpool, albeit sandwiched between some fairly routine outings. Big Phil loves a routine performance though, especially in this position, which is why Lucas is likely to be fighting it out with Wolfsburg’s Luiz Gustavo for the more disciplined role.

Paulinho of Spurs and Hernanes of Lazio give Scolari two slightly different options in midfield alongside the holding player, with the Tottenham man providing the attacking drive, and Hernanes bringing some more flair and creativity.  Ramires of Chelsea has also been called up to the squad, but his versatility could turn out to be as much a hindrance to him as a help when it comes to getting called up for future squads. 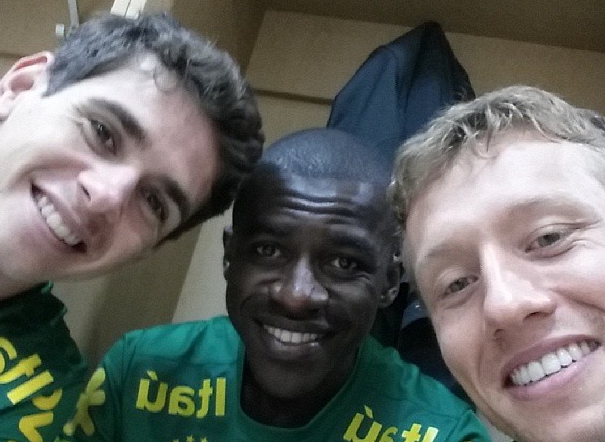 Oscar, Ramires, and Lucas could team up in Brazil’s midfield against South Korea or Zambia.

Another area where Brazil are blessed with talent is in the attacking midfield positions. The selection of Chelsea star Oscar doesn’t raise many eyebrows, except maybe his own, and the 22-year-old looks set to help Neymar carry the weight of a nation on his shoulders come next summer.

This Brazil squad is lacking another true number 10 as a back-up to Oscar, which could leave a door open for one of the umpteen players who wait creatively in the wings to play through balls to Neymar and Fred. Liverpool’s Philippe Coutinho could have provided another option here had he not been injured, but players such as Hernanes, Bernard, Lucas Moura, and even Neymar can all play here, but the latter three are better suited to wider areas.

Hulk makes up the numbers when it comes to the “not quite a striker” selection of wingers and attacking midfielders, and the big man should be in Scolari’s plans for the foreseeable future, using his impact play and physicality to force the issue should the need arise later on in games.

There is much talk of Brazil’s striker situation, and everyone has an opinion as to who should play in the lone attacking role at the head of the attacking spear. The opinion that ultimately matters is the manger’s, and he seems to prefer the out-and-out poaching skills of Fluminense’s Fred. And the 30-year-old hasn’t given his detractors much ammunition to attack him with, having scored 9 goals in 10 international appearances this season, including two in the Confederations Cup final against Spain. Who needs link-up play and passing? 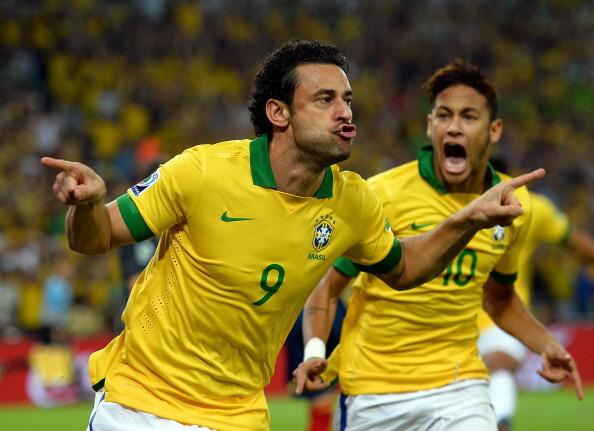 Fred Scores for Brazil against Spain at the Confederations Cup, as Neymar celebrates.

Elsewhere, we have Alexandre Pato who’s managed 7 goals in 14 starts for Corinthains since moving back to Brazil, but his all round performances haven’t lived up to the hype surrounding his transfer from Milan, and Corinthians lie a disappointing 10th in the table. Atlético Mineiro’s Jô keeps his place in the squad after some impressive substitute appearances for The Seleção over the past year. He’s scored 5 goals in 6 brief appearances for Brazil this year. It remains to be seen which of the two will start in Fred’s absence.

The big talking point up front is the subject of Diego Costa’s defection to Spain, as many thought he would be perfect to lead Brazil’s line, or at least play back-up to Fred. His lack of inclusion in Brazil squads might be the reason he’s now chosen Spain as the country he’ll represent, as the striker is clearly good enough to play at international level.

The game against South Korea could provide a tougher test than many seem to expect in the build up to the game, and it’ll certainly be a good run out for the Brazil players looking to give their manager something to think about ahead of the once in a lifetime opportunity next year.