Brazil Under 17s advanced to the Quarter finals of the FIFA U17s World Cup, after defeating 10 man Russia by three goals to one in the first knock-out game.

The game remained in the balance at 0-0 until Russia’s Dimitry Barinov was sent of on the 69th minute. This gave Brazil more space in which to unleash their attacking talent and claim the win. 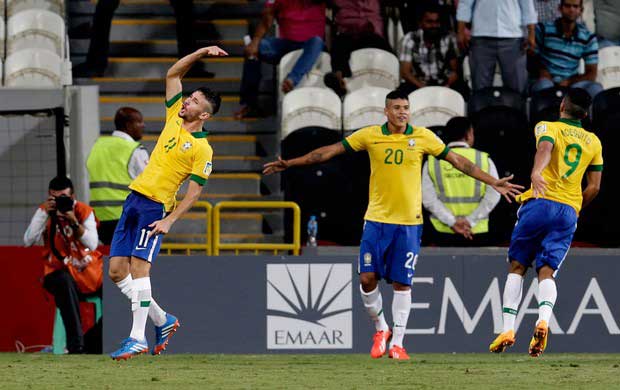 Mosquito opened the scoring just minutes after the sending off, as right back Auro’s brilliant dart into the area breached the Russian defence. Auro then had the awareness to pick out his centre forward, with Mosquito on hand to put away the squared pass.

The rest of the game belonged to one of the stand-out players of this Brazil team so far – Boschilia of São Paulo. His first goal was a real poachers effort, as he made an intelligent run into the box to get on the end of a pin-point low cross from the left, provided by exciting Fluminense youngster Kenedy.

The second was mostly his own work. He played a one-two on a few yards outside the eighteen yard box on the right, before driving into the area only to see his shot saved. Mosquito then looked to pounce on the rebound but the Russian goalkeeper Anton Mitryushkin got a hand to it, but merely presented the ball to Boschilia who hadn’t given up on the play, and he slotted home.

Brazil will face Mexico in the quarter finals on Friday afternoon at 4pm UK time.