Leandro Damião has joined former Botafogo coach Oswaldo de Oliveira at Santos, in an £11m move from Internacional. The deal will see Doyen Sports Investments take 70% of 24-year-old striker’s financial rights, with Santos taking the remaining 30%. Damião is to be presented to the Santos fans as a marquee signing, possibly to ease the hurt suffered by the club after the departure of Neymar. However, should the striker live up to this billing and make a big money move to Europe as Neymar did, Santos are unlikely to benefit financially. 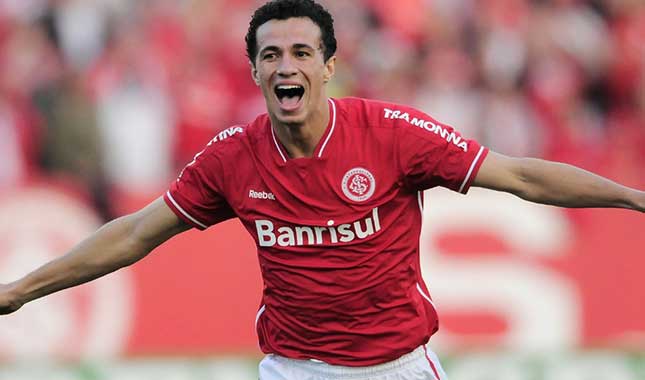 Damião in action for Internacional

Doyen Sports offer a financial package to Santos enabling them to sign a player once thought to be a future Brazil number nine, and one who was once high on the list of transfer targets for several European clubs. However, Damião endured stuttering form in 2013, scoring just 5 goals in 26 appearances (23 starts) as Internacional narrowly escaped relegation. Should Damião’s indifferent for continue, the financial help from a third party means the transfer is less of a gamble for Santos than it would be if they’d paid the full fee.

The discussion of third party ownership is for another time, but a recent article on Goal.com by Kris Voakes had a dig into the subject and is a good starting point.

Below is an extract from an article on Damião I originally wrote for the Beyond the Kop Liverpool fan-site:

Damião began his career as a midfielder, playing in youth sides in Santa Catarina in southern Brazil, but his progress was slow and he almost gave up on football at the age of 18. He comments in this interview on the FIFA website, that he was very close to looking for work outside of football in order to help his family:

“When I went to [Atlético] Ibirama a lot of people said I wasn’t good enough. I had an awful lot of problems to face and I nearly gave up football to go and help my family.”

A change of position brought a change in fortune. The club gave him a second chance in his new role as a centre forward, and the goals started flowing. His performances in the Santa Catarina state championships attracted interest from clubs in the upper echelons in Brazilian football, and he eventually signed for Porto Alegre based club Internacional in 2009.

His rise continued at Inter, where he was promoted from the U20s to the first team reserves almost immediately, and it wasn’t long before he was making his debut for the senior squad, first in the Gaúcho state championships, then the Brazilian top flight, and then in the big one – the Copa Libertadores.

His appearance in the 2010 Copa Libertadores was short and sweet. He played just over 18 minutes in the entire competition, but his contribution was great, as he scored a goal almost as soon as he entered the field of play in the second leg of the final. Internacional won the cup and Damião had himself a Copa Libertadores medal.

In 2011 he formed a formidable partnership with another promising young Brazilian named Oscar. The attacking midfielder had recently joined from Sao Paulo, and between them they played some part in almost all of Internacional’s goals that season, such was their chemistry in attack.

Oscar now plays his football in the English Premier League for Chelsea, and is a vital part of the current Brazil set-up, but Damião’s progress has stalled somewhat.

Leandro was set to become the focal point of Brazil’s attack under previous manager Mano Menezes, as they looked to build a future proof squad, along with a future proof playing style which was more reliant on team play than individual stars. Unfortunately this plan came to an end when Mano Menezes was sacked due to some poor results, and a failure to win the much coveted Olympic gold at the London 2012 games.

Much of the good work done by Menezes has been continued, and some of his young squad has remained intact under Luiz Felipe Scolari but, due in part to some injuries at unfortunate times, Damião has been replaced by Fred as the Selecao’s focal point.

A move to Europe might just be what Damião needs. Many of his countrymen have moved to Europe’s higher profile leagues in order to stay in the public eye, as they look to remain in contention for the national team. A similar move could see Damião reclaim his place in the squad, if not the first XI, for the all important 2014 World Cup in Brazil.

Damião is a complete centre forward and can lead the line as well as dropping deep to link up play. He’s got the speed to play off the last defender, the strength to hold the ball up, and the skill to link up play or take on a man. He’s a right footed player with a powerful shot, and is generally composed when through on goal.

Unlike some of Liverpool’s recent attacking targets, he’s not a player who can play across all three of the forward positions, though you wouldn’t put it past Brendan Rodgers bringing him on in a wide position if he were to join Liverpool.

It was no surprise that he was Mano Menezes’s choice of striker for Brazil, and he utilised Damião in a similar role to the one carried out by Fernando Llorente in Marcelo Bielsa’s much admired 2011/12 Athletic Bilbao side. It’s rare to find a striker with the build of a target man, but the skill of a more creative player, and Damião’s experiences playing in midfield as a youth player must surely help him in this respect.

Damião has only played in 6 of his side’s matches so far this season, as he was injured at the start of the 2013 campaign, but since coming back into the side he’s scored two goals and made two assists.

Last season he scored 7 in 19, as his season was interrupted by Brazil call ups, and specifically the Olympic games, but as mentioned earlier it was the 2011 season playing alongside Oscar where he really announced himself.

In this 2011 season he played 28 games, scoring 14 goals and bagging 6 assists, and during this year he also made his debut for Brazil at Arsenal’s Emirates stadium against Scotland. He also scored his first international goal on English soil, as his powerful right foot effort gave Brazil a 1-0 win against Ghana at Fulham’s Craven Cottage.

In the 2012 Olympics, he finished the tournament as top scorer with an impressive return of six goals in five games.