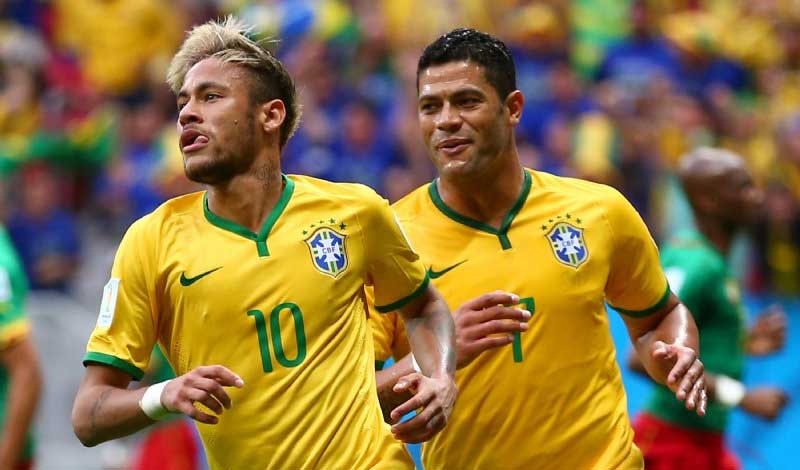 Brazil secured the top spot in group A after duly disposing of a Cameroon side who exited the tournament without a single point. The Seleção weren’t entirely convincing as they advanced to the knock-out stages, but progression is the only aim at this stage and the host nation are an intriguing, entertaining prospect heading towards the business end.

The starting eleven which was widely predicted before the start of the tournament has been Luiz Felipe Scolari’s mainstay, but he’s been tinkering with it, as well as playing most of his tactical cards from the bench during the first three games.

Getting the best from Neymar was always going to be a key deciding factor in any success Brazil might have, and so far the manager has shifted his attacking midfield three around to accommodate the star number ten. Oscar has been seen on either wing, as well as in his more familiar central position, with the Chelsea man having to settle for a support role in which he can use his versatility to help the team.

Similarly, Hulk swapped wings to great effect in the first game but played mainly from his less preferred left side. Another one of Neymar’s supporting cast; Hulk has proved many doubters wrong, and was sorely missed in the 0-0 stalemate versus Mexico for which he was injured. Returning to the side on the right wing for the final group game, this allowed Marcelo to offer the attacking width on the left, and Hulk gave Cameroon enough problems to create space for Neymar and Fred in the middle as Brazil executed the obligatory romp. 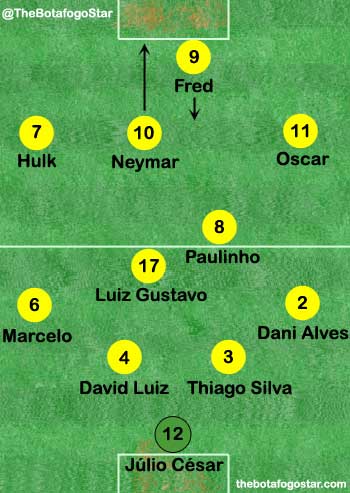 The first game versus Croatia finished 3-1 to Brazil but wasn’t as easy as the scoreline suggests. Some favourable refereeing saw Neymar escape with just a yellow card after appearing to elbow Luca Modric. Croatia also had a goal chalked off after an innocuous challenge on Júlio César was given as a foul, just as the impressive Ivan Perišić slotted the ball in the net. There was some contention surrounding the penalty given to Brazil, but Dejan Lovren gave the referee every reason to award the spot-kick after clumsily tangling with Fred. That said, Neymar’s penalty should have been saved by Stipe Pletikosa who didn’t have the best of games.

During this game Scolari introduced two of his tactical changes from the bench in the shape of Bernard and Ramires, as well as his wildcard Hernanes. The tentativeness and sloppiness from Brazil in this opening game forced the manager to make these changes, as the game was still level mid-way through the second half.

Hernanes offered more guile than a disappointing Paulinho in midfield, whilst Ramires added steel in the middle and some dynamism between the boxes in the final minutes. Speaking of dynamism, the jinking Bernard replaced the powerful Hulk to give Croatia problems down the left, with the Shakhtar winger also performing his defensive duties well once Brazil were ahead, supporting left-back Marcelo. Oscar secured the win late in the game with a toe poke out of the top drawer. 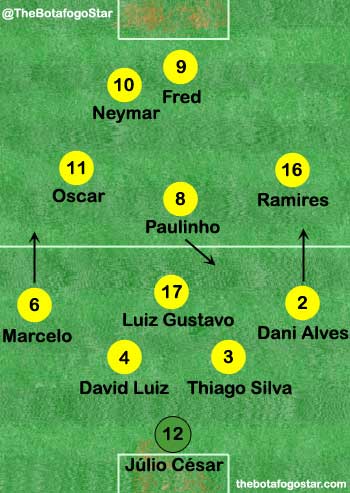 If Croatian goalkeeper Stipe Pletikosa gave Neymar and co. a helping hand in the first game, then the opposite was true of Mexican stopper Guillermo Ochoa in the second. Ochoa put in a man of the match performance against Brazil, saving all of Brazil’s six shots on target. Mexico themselves had a total of 13 shot, so it wasn’t all Brazil, who had just one more with 14, but El Tri only found the target with two of these efforts.

For Brazil Ramires was chosen over Willian and Bernard to replace the injured Hulk, as Brazil played in a fairly attacking shape with only David Luiz, Thiago Silva, and Luiz Gustavo performing out-and-out defensive roles. This said, the personnel within the side and the inclusion of Ramires meant the team were more dogged throughout. Gustavo was vital to this system and halted Mexico on numerous occasions, but the selection of Ramires didn’t work out, and he was replaced by Bernard at half time.

The game also saw the introduction of back-up striker Jô who replaced the ineffective Fred midway through the second half, and Willian finally got some game time during the last five minutes. The side struggle to get in behind Mexico’s stubborn back line with Fred and Ramires on the pitch, and the introductions of Bernard and Jô was an ultimately failed attempt to solve this problem.  This test versus Mexico gave Scolari plenty to ponder for future games, and was just what Brazil needed at this stage in the tournament. 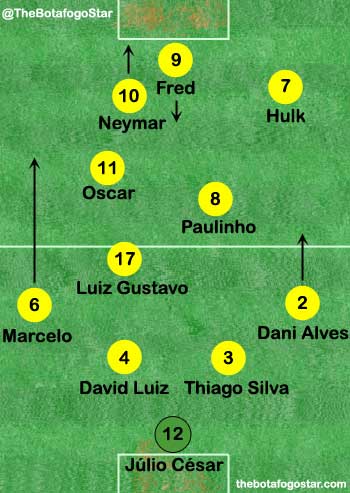 Instead of making wholesale changes after the draw in the second game, Scolari decided to revert to his trusted starting eleven as Hulk returned from injury. Neymar showed his real star quality in this game, and it was he who opened the scoring, guiding a Luiz Gustavo cross into the bottom corner with his right foot. Cameroon then equalised and the host country fell silent, but not for long…

If Neymar’s first goal displayed a striker’s instinct in the box, then his second was more what we might expect from his talents. Receiving the ball on the left he cut inside across the Mexican defence and fired his right foot shot into the bottom left corner, sending the Cameroon defence and goalkeeper sprawling in the other direction.

As Fred sealed the victory with an awkward looking header at the start of the second half, Brazil were safely through to the knock-out stages, topping their group with seven points. Fernandinho had replaced the struggling Paulinho at half time, and in the 45 minutes he played he made a good case for this to be a permanent alteration to Scolari’s XI. The number 5 added Brazil’s fourth towards the end of the game, and everyone was going home happy in preparation for the knock-out stages.

Brazil did the job required of them. Topping the group on goal difference ahead of Mexico with three games which will be remembered for some good individual play, if not for the actual results. Manager Scolari used most of the options available to him in terms of tactical personnel shifts, with only like for like back-up players remaining unused in the tournament so far. Utility player Henrique could offer a further tactical alternative, but any drastic changes are unlikely to be made.

Oscar’s support of Neymar has been key, as has Neymar’s free role becoming more central in origin rather than from the left, although he can still be found using the flank effectively on occasions. The performances of Hulk remain important, and should he falter he’ll quickly have the fans on his back. Fred could grow into the tournament as he did in the Confederations Cup, but if he doesn’t Brazil’s attacking options look slim and uncertain. It’ll be interesting to see how Brazil’s defensive organisation copes with stronger opponents, and the often criticised decision making of certain individuals in defence will also be key.