Last week, in the same bar and restaurant district of Belo Horizonte where visiting fans from Colombia, Chile, England and other countries gathered during the World Cup, Reinaldo, former Brazil international and the Atlético Mineiro’s all-time leading scorer, held a promotional event. During the party a big TV screen outside the bar showed some of the greatest moments from the glorious, though injury scarred career of O Rei (“the King”) during the 1970s and 80s. Many of them took place at the Mineirão stadium, and all were accompanied by shots of pandemonium in the packed, wildly celebrating stands, with bodies tossed above the crowd like in a heavy metal mosh pit. It looked dangerous, terrifying…and absolutely thrilling.

Fast forward twenty years or more from those halcyon days. Last month the Copa do Brasil final between the Belo Horizonte big two, Atlético and Cruzeiro, was played at the same venue, recently refurbished at considerable expense for FIFA’s summer jamboree. The match was widely described in the Brazilian media as the biggest in the city’s history and yet the Mineirão – which with its lower terraces removed, brightly coloured new seats and glistening new pitch, was unrecognisable from the draughty barn of Reinaldo’s day – was only around two thirds full. The banks of empty seats – glaringly obvious on the side of the ground facing the TV cameras – were the result of the decision by Cruzeiro (and/or stadium management consortium Minas Arena) to price tickets for the game at up to R$700 (£169). In fact, Cruzeiro had tried to charge the visiting Atletico fans R$1000 (£241), before a court ruled that such a price was abusive.

The two scenes illustrate perfectly the shock of Brazil’s lurch towards footballing modernization and all its dubious benefits.

On one side there was the local hero, described by no less a judge than Zico as the player who would have come closest to rivalling Pelé had it not been for a series of debilitating knee injuries (and the often botched surgeries that accompanied them), yet who remains criminally underrated (or even downright unknown) outside Brazil. Reinaldo played at a time when footballers lived well, compared to ordinary people, though hardly in the Brangelina-style gilded luxury to which they are accustomed today. Now, seldom without a glass of beer in his hand, the garrulous Rei held court outside a perfectly ordinary Belo Horizonte bar, posing for pictures alongside adoring fans without a security guard or publicist in sight.

On the other, the headlong pursuit of the corporate footballing dream – a luxuriously equipped stadium, with well-heeled fans dividing their time between grinning at the jumbotron cameras and spending their cash on expensive snacks at the catering outlets, while Brazilian internationals such as Diego Tardelli and Everton Ribeiro strut their stuff on the perfect pitch. Outside, in the working class bairros of Belo Horizonte, the sons and daughters of the fans who used to fill the Mineirão to watch Reinaldo must settle for watching on TV.

It is hardly a unique story, of course. A similar transformation has taken place over the last 20 years in England, with the windy Kippaxes and Stretford Ends swept away and replaced by temples of modern footballing excess such as The Emirates and the remodelled Stamford Bridge. Yet while those who paid almost £60 to watch Chelsea play Man City last season might not agree, the Premier League revolution has arguably been a largely positive experience, the dark days of the 1970s and 80s – the gruesome football and the thud of stampeding DM boots in the grounds and on the streets – exchanged for a more consumer friendly, if occasionally soulless, match day experience (and of course the not unwelcome bonus of untold millions of TV, sponsorship, and merchandising revenues).

For Brazilian football, the Premier League undoubtedly represents a very desirable model indeed to follow, and the new World Cup arenas have given clubs exactly the excuse they need to jack up prices. Unfortunately, however, the voraciousness and greed currently on display in Brazilian football makes England’s early 1990s Sky makeover look like the birth of the NHS. The revolution here may be stillborn.

A recent study by marketing group BDO showed that ticket prices in Brazil have risen by 12% in the last year, while a survey by the Daily Mail found that Brazil was the second most expensive country in the world to attend a football match – trailing only China. Such statistics follow an ongoing trend – another study last year, this time by Pluri Consulturia, showed that Brazilian match tickets had risen 300% over the previous ten years. Propelled by the new stadiums, Serie A has notched up record gate receipts in both the last two seasons, including a seemingly impressive R$215.7m (£52m) over this year’s 380 top flight games.

So far so lucrative, you might think. Only such gaudy statistics can be misleading. Attendance figures in the Brazilian top flight crept up only slightly this year, to a hardly dizzying 16,555 – a fairly puny increase on last year’s 14,955, especially considering that no fewer than eleven Serie A teams finished the year playing in the aforementioned luxurious new stadiums. It is sobering to note that according to a recent study by the Folha de São Paulo newspaper, the average attendance of all but one of the 12 World Cup venues was below 50% of capacity (dropping as low as 23% in the case of the Arena Fonte Nova in Salvador).

Such figures would suggest that Brazilian football has rather got things the wrong way around in trying to sell its supposedly “new and improved” product at prices far higher than the public is willing to pay, especially for football that is very often of shoddy quality. The results contrast sharply with the Premier League revolution, where fans were (and continue to be) willing to stump up more for an attractive product that was suddenly in great demand.

“The price of tickets is far higher than the quality of the football, and the fans know it” says Amir Somoggi, a Brazilian sports finance and marketing consultant. “It’s great that they have new, comfortable stadiums to watch it in, but it won’t help if the games are poor.”

So clumsy have been the price increases – tickets costing R$150 (£36) or more are not uncommon for big games – that any sense of progress and modernisation has been replaced with the feeling that supporters are being exploited. The Arena Fonte Nova is a case in point. Rather than encourage Bahia fans to attend games at the new ground, ticket prices at early games at the new stadium and during the World Cup only served to convince the club’s fanatical, largely working class fan base that the new stadium was not for “the likes of us.” As a result, even when prices were reduced late in the season, there was little positive effect (although the team’s miserable season on the pitch didn’t help). 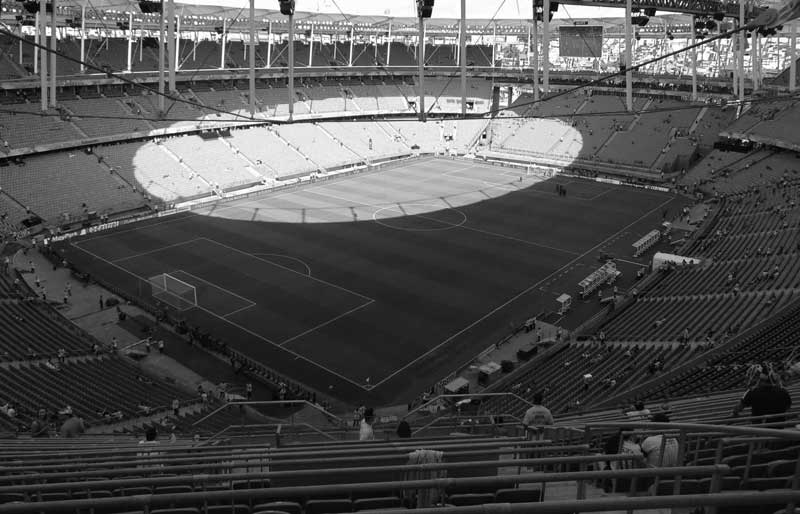 Arena Fonte Nova. One of the stadiums used for the World Cup, and now home to Salvador based club side Bahia. Image © The Botafogo Star

According to the BDO report, tickets in the new stadiums were 84% more expensive than their equivalents in Brazil’s older venues last season (the average ticket at Palmeiras’ Allianz Parque was R$114 (£27)), resulting in a visible change in the profile of the fans in the stands. On the plus side, there appear to be more family groups and women at games, attracted by the greater sense of safety and comfort that the venues offer. Demand for sócio membership packages has also increased, with fans keen to take advantage of ticket discounts. More sinister, however, is the potential exclusion of Brazil’s working class supporters. It is hardly surprising – a ticket costing R$150 represents only a little less than a week’s wages for a minimum salary worker. 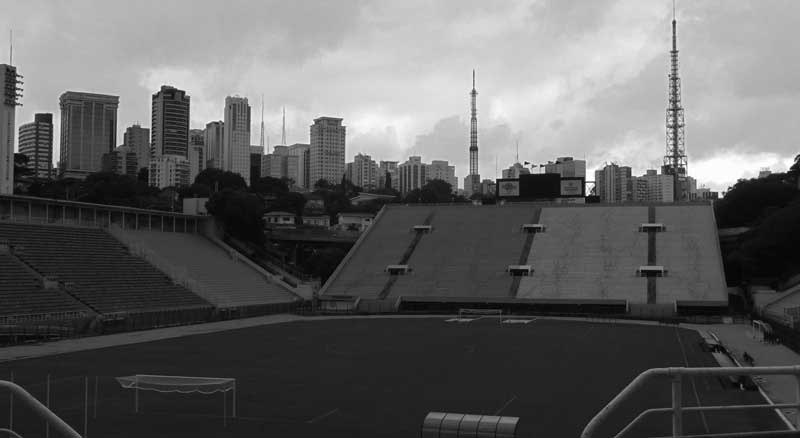 Pacaembu Stadium, São Paulo. The temporary home of Palmeiras prior to their move across town to the shiny new, and expensive, Allianz Parque. Image © The Botafogo Star

“Obviously more sophisticated stadiums will mean more expensive tickets,” said Brazil’s Sports Minister Aldo Rebelo at the time, “but our hope is that some tickets will be reserved for less well-off fans.” Such a hope, has, rather unsurprisingly, remained marooned on Fantasy Island, although clubs have offered reduced prices when gates have been low or for less interesting fixtures.

With the stadium management consortiums needing to justify the cost of their fabulously expensive new venues, and teams as desperate as ever for cash, there is no sign of Brazilian football ticket prices going down any time soon. In the meantime, it is likely that clubs will continue to play in front of half empty stadiums – with millions of ordinary fans trapped on the outside looking in.