“When it’s all a bit more formalised, it’s less about developing your individual skill and fighting attitude. We’ve lost that a bit. Not every South American has that, but if you go back 30 or 40 years in England, life was tougher. Society has changed. We’re much more protective than we were 20 or 30 years ago. We have all become a bit softer.”

Full disclosure, I am an Arsenal fan, but that seems like a perceptive reading of the situation. Yet of the strikers listed, only one is Brazilian and he has never played at any level in his home country and notoriously shunned the chance to represent Selecão in favour of the Spanish national side. There are few more diminished and mocked species than the humble Brazilian striker. To mangle another Wenger aphorism slightly, South America’s biggest and most storied footballing nation is serving up sausages where once it produced caviar. 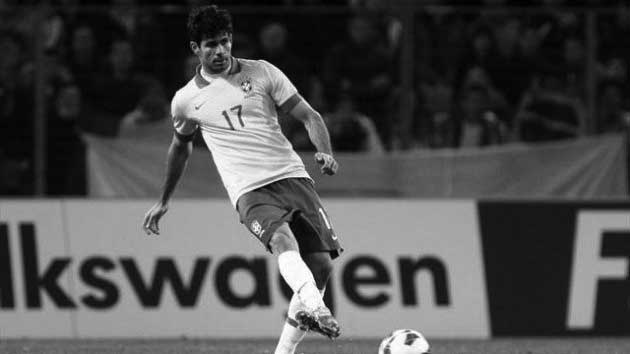 Diego Costa – the one that got away.

Nowhere is this more apparent than in Brazil’s national side. Back in October I wrote about the dual woes of Fred and Jô. Whilst neither features for the national side any longer, Dunga has had to be creative with a short term solution. 29 year old Diego Tardelli has rediscovered his form for Atlético Mineiro and has been entrusted with a kind of false nine role for his country, but this solution hardly compares with the level of forward Uruguay, Chile, Argentina and Colombia are able to boast. With Copa America on the horizon, 2015 has to be the year of the Brazilian striker. Tardelli has shown that a short burst of form can yield a call up, and not just to the substitutes’ bench either, but as the sun which wanders and orbits around Neymar.

A mixture of voluntary international purgatory and irreparable damage to his reputation means Fred is very unlikely to figure in Dunga’s thoughts. Yet there is no Brazilian striker in ruder penalty box health. Despite the gentle and ever-present hum of terrace disquiet from Fluminense fans, Fred finished as top scorer in Brasileirão last season. He is currently seeking a change of scenery to break free of the suffocating air in Rio. Having failed to qualify for Copa Libertadores, Fluminense will probably be grudgingly happy to trim his salary from the wage bill.

The burden of Fred’s salary is emphasised by the failure to seal a homecoming to his Belo Horizonte womb at Cruzeiro, who have reportedly donned a golf visa, cranked the adding machine and baulked at the sums put before them by Fred’s agent. At 31, he is unlikely to improve, so unless he relaxes his wage demands, he may have to continue ply his trade against the background of gentle mockery from, it must be said, some laughably ungrateful Larenjeira fans.

Another Brazilian striker nursing serious damage to his #brand is Alexandre Pato. Following a rather miserable spell at Corinthians under Tite – Brazil’s answer to George Graham – Pato joined city rivals São Paulo on loan. His tenure at Soberano began in a lukewarm fashion, but, as I documented in September the capture of Kaká on loan set off a chain reaction. Ganso improved markedly and Pato found that he was hitting the net on a regular basis. He notched 9 goals in 12 games in August and September.

There was even talk of international redemption for Pato, the man who, as Terry Hall once crooned, “Done too much, much too young.” However, in early October, Pato picked up an injury which more or less ended his season. He managed the odd substitute appearance as Cruzeiro dipped over the horizon and out of view in Brasilierão, and São Paulo tumbled out of the Copa Sudamericana at the semi-final stage. With Tite back at Corinthians, Pato will stay at Tricolor for another season at least. Now shorn of MLS bound Kaká, whether Pato, and by extension Ganso, maintain their mid-season form will be one of the more fascinating narratives of the 2015 season.

The biggest transfer story of the post season interval has revolved around Leandro Damião’s imminent move to bi-campeão Cruzeiro. On the face of it, it seems a peculiar choice for Raposa. Oliveira’s great success at Cruzeiro has been predicated by canny transfer purchases from hitherto unsearched nooks and crannies of Brasileirão. Kind of like a Brazilian Jurgen Klopp. At Cruzeiro, the team is very much the star. An underperforming big name striker on a large salary seems a curiously extraneous move. Bolivian striker Marcelo Moreno, on loan from Grêmio, led the line for Oliveira last season to great effect, despite managing an impoverished 2 goals in 16 appearances for Flamengo in 2013. 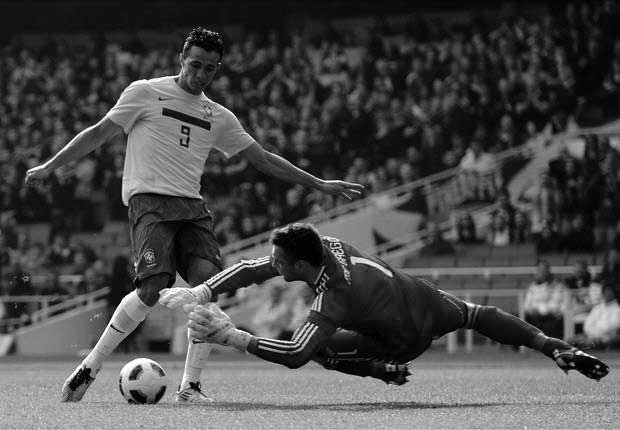 Leandro Damião, on his way to Cruzeiro, disappointed at Santos after showing early promise with Internacional.

With Moreno set to return to Grêmio from his Belo Horizonte foster home, Cruzeiro have turned to Damião, who, as Paulo Freitas wrote back in August, has seen his career stall in recent years. Yet for Damião, the move represents the final chance to rehabilitate his reputation. Cruzeiro scored 77 goals in 2013 (12 more than the second most prolific team, Atlético PR) and 67 in 2014 (6 more than Fred propelled Fluminense). If Damião struggles to score with the likes of Everton Ribeiro and Ricardo Goulart attending to his every whim, then his transition into the Brazilian Fernando Torres will be complete. Cruzeiro’s style potentially suits him a lot more than Santos’, which seemed like an odd move for him from the very start.

With the possible exception of Adriano, there can be fewer modern tales of Brazilian striker woe more heartsick than that of João Alves de Assis Silva. Atlético Mineiro have shown Jô the door and politely advised him not to let it hit him on the traseiro on the way out. Not satisfied with a failure to score in 25 appearances, he seriously breached club discipline on three separate occasions during this most fallow of purple patches. His club’s patience expired when Jô completed the only hat trick he now seems capable of in November as he, Emerson Conceição and Andre seriously breached club discipline in a Coritiba hotel after defeat to Atlético Paranaense. The 3 players were suspended from their contracts for a period of 30 days. They missed Galo’s Copa do Brasil triumph during this period of banishment.

Galo explored the possibility of dismissing Jô, but the Minas club instead settled on making him very publicly available for transfer. The problem is that the São Paulo born striker is very much damaged goods, with even his own father publicly voicing his concerns at junior’s devil may care attitude. Only the most desperate club would take a risk on the player, who seems to view training as an optional extra. His dedication to Brazil’s nightlife outstrips his love of football, so as a result, nobody wants to proposition Jô. At 27, he ought to be entering his prime, but instead the career of another Brazilian footballer looks as though it will be buried beneath an avalanche of ill-discipline.

Tellingly, Galo have looked to Argentina to replace Jô, as they moved for Velez Sarsfield’s prolific striker Lucas Pratto. Champions Cruzeiro have already tied up a deal for Colombian striker Joel. At Corinthians, Peruvian José Paolo Guerrero is making hay from a good season at the Paulista club as he tussles for an improved contract. Rumours have begun to circulate the Brazilian gossip pages that if they cannot sate Guerrero’s demands, O Timão were even considering Fernando Torres as the player to fill the gap. The country that produced Pelé, Romario, Ronaldo, Bebeto, Heleno de Freitas and Careca is suffering a crisis of faith. In 2015, this most superstitious of nations will want to see their belief rekindled in the once proud apotheoses, the Brazilian striker.