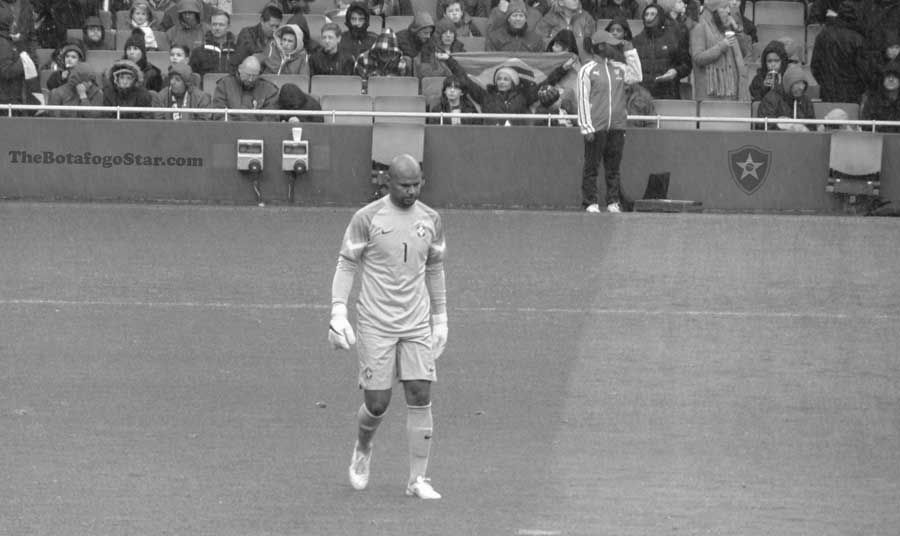 The late English showman Bob Monkhouse had at least one great line in his locker; “everyone laughed when I told them I was going to be a comedian,” he said.  “Well, they’re not laughing now!”

It is a comment that Botafogo goalkeeper Jefferson may well appreciate.  An unorthodox part of his modest upbringing in Sao Vicente, on the outskirts of Santos, was a spell he spent in a circus as a clown’s assistant.  But he is well aware that his current task is no laughing matter.  Keeping goal for Brazil is one of the most highly pressured jobs in sport.

Some 15 years ago, at Rio airport, I did an interview with Taffarel, a few months before he played his third World Cup as Brazil’s first choice keeper.  The team were on their way to the USA to contest the Gold Cup, and the pre-France 98 expectations were beginning to build.  This was to be the first World Cup after Nike had got involved with the Brazil, and their global advertising machine had created the idea of a dream team.

Taffarel made it very clear that he did not believe a word of it.  I was left with a clear impression that he did not believe in Brazil’s defence.  His subsequent actions bore this out.  He made sure that he fixed himself up with a move – to Galatasaray in Turkey – before the tournament.  In the event, he had a fine World Cup, and had he waited until afterwards he might have got himself a better deal.  But his suspicions about Brazil’s defence proved well founded.

Those suspicions were transmitted not so much in what he said – it was more in his tone of voice and, especially, his expressions.  The fact that the interview happened in such a public venue was a big help; Taffarel could look around the busy scene and feel deep in his soul that he would be running the risk of letting all these people down.  Because in a World Cup, Brazil’s goalkeeper must prepare himself for long periods of inactivity.  But there will be moments in the course of the tournament when he will be called upon to make vital interventions – and his success will determine the mood of 200 million people.

It is a daunting responsibility – but one for which Jefferson is now the front runner to assume in Russia 2018.

This in itself is a remarkable achievement – and not only because he plays for a club which have been relegated to the second division.  More extraordinary is the fact that 6 years ago, at the age of 26, Jefferson made his way back to Brazil after an undistinguished time in Turkish football.  At the time he did not have a contract, and the idea that he would before long be in contention for international honours would have seemed ludicrously far fetched.

It may well be the case that Jefferson suffered from being pitched too early into senior football.  He was first choice keeper for Cruzeiro at the age of 17, meaning that his mistakes were very public.  Confidence is everything for a goalkeeper, and his took a battering.  I well recall watching him at the start of 2003 in the South American Under-20 Championships in Uruguay.  As he came out badly for another cross, a vastly experienced local journalist turned to me and commented that Brazil’s keeper was not up to the standard of the rest of the team.

And yet 12 years later, barring a (possible) recall for right back Daniel Alves, Jefferson is the lone representative of that Under-20 side who remains in senior contention.  Goalkeepers mature late, of course.  So much of the position is about getting decisions right – when to come for the cross and when to stay on your line.  The years have brought tranquillity to the Botafogo keeper, and armed with calm and confidence he now makes much better decisions.  And so that natural athleticism, which so captivated then-Cruzeiro coach Luiz Felipe Scolari at the turn of the century, is now fully to the fore.  As a result, with remarkably little controversy given that he has been playing for a relegated club, Jefferson has been Brazil’s first choice keeper since the World Cup debacle, only missing out on November’s matches because no domestically based players were called up.  In all he now has a total of 15 caps, with just 5 goals conceded.

In this second spell of coach Dunga, the only time he has been the first choice, he has condeded just one goal in six matches.  And it was after that goal – in last month’s game against France – that the local sports daily ‘Lance!’ got carried away in its enthusiasm.  He made some excellent saves, causing the newspaper to proclaim that he “showed why he should be the first choice in Russia 2018.”

There are, though, a number of hurdles to overcome.  First, of course, Brazil have to qualify.  And before that comes the Copa America in Chile, kicking off this next cycle of competitive matches.  Jefferson’s international record is all very well; but so far he has only played friendlies.  The Copa will be his first real test – and he will have to do it after rushing back from a knee operation.

There are plenty of pitfalls between now and 2018, especially for a goalkeeper who is already 32, and who will have to watch his rivals in the Libertadores or the Spanish first division while he spends 2015 in Brazil’s second flight.  But Jefferson has reached an age where he will surely nod in agreement with a piece of advice that Taffarel gave to those who wanted to follow in his footsteps as Brazil’s goalkeeper; “never get too carried away when things seem to be going well, and never let your head drop when things are going badly.”