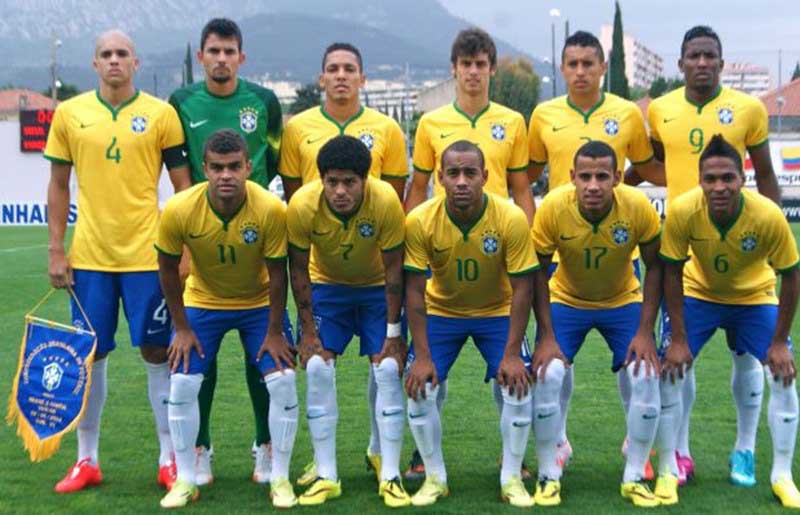 Brazil’s youth side claimed the Toulon Tournament title for the second year in a row, after a string of impressive displays culminated in a 5-2 win against France in the final. The French side brought the best out of this promising generation of Brazilians, who boast an array of talent all the way from goalkeeper to centre forward.

We already know Marquinhos is destined for great things, and Dória of Botafogo has been written about many times by many people, including on here! So here’s a look at some of the stand out players who aren’t so well known:

Fluminense’s 18-year-old keeper was handed the award for youngest finalist, but throughout the competition he displayed a composed head which belied his years. It’s rare that a keeper’s mental and physical attributes combine at such an early age, but should these qualities remain intact and improve with coaching and game time, Marcos could be a Brazil number one in the future.

Right backs Gilberto of Internacional and Auro of São Paulo, along with a left side consisting of Wendell of Grêmio, and Douglas Santos who spent the last season on loan at Udinese from Granada, look set to maintain the Brazilian tradition of excellent attacking full backs.

Whilst he had the least game time of the four, Auro looks like the natural successor to current Brazil right back Daniel Alves, whereas Gilberto would be more like Maicon. Wendell continued the impressive form he’s shown at his club since the departure of Alex Telles to Galatasary, and Bayer Leverkusen fans will be looking forward to seeing the 20-year-old as he joins their club in the coming season. 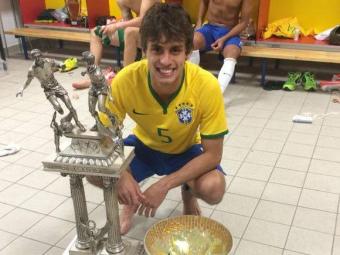 Rodrigo Caio with his player of the tournament award!

Equally as competent in the centre of defence as he is in the centre of midfield, São Paulo’s Rodrigo Caio impressed throughout the competition, and came away with a much deserved player of the tournament award.

Caio can play in the centre of defence, using his impressive leap to compensate for his lack of height (when compared with others in his position – he’s just under 6ft, or 182cm). This jump coupled with a good heading ability makes him a danger in the opposing penalty box too, and he’s scored several goals from corners and set pieces, both for Brazil and his club.

As well as his technical defensive qualities, he also has a high work rate, good reading of the game, and the ability to pass the ball well, which means he can play in most midfield positions. During the tournament he had a short stint at centre back, but played much of his football in the middle of the park, wearing the number five shirt which reflected his role.

It’s difficult to argue with the tournament organizers’ decision to hand him award for player of the tournament, and it’ll be interesting to see how long it is before he’s tested at senior level for Brazil, as he’ll turn 21 this August.

Ademilson is the third São Paulo player to make this list of stand-out players, and the player who wore the number 10 shirt for Brazil during this tournament is probably the most typically Brazilian. Full of attacking flair and enterprise, Ademilson has improved greatly over the last year or two and has added a maturity and composure to his array of natural attacking gifts.

He was the focal point of Brazil’s attack, with much of his side’s play in the final third going through him on the way to a striker or wide forward. His only goals came from the penalty spot, but he was involved heavily in the final third.

Whilst Ademilson is the player who knits things together for this Brazilian youth team, Luan is the maverick forward who has the ability to produce something special when you least expect it. His slightly gangly, leggy frame can give defenders a false sense of security when they come up against him, but he uses this physique to compliment his technical ability as he charges past confused defenders with his quick long strides.

The 21-year-old Grêmio man appeared primarily from the bench in this competition, but impressed each time he entered the fray as he drifted behind or either side of the centre forward. He was one of the standout players in the Seleção’s 7-0 rout of Qatar, which was his only start of the tournament, but also did well against stronger opponents. With the right coaching and career guidance, his combination of speed, strength, and skill could see him play at the top level sooner rather than later.

It’s difficult to write a report on such an impressive Brazil side without mentioning the entire squad, but the spotlight will shine on the others in due course if they continue their form at club level. The Cruzeiro trio of Lucas Silva, Alisson, and Gilberto showed great promise in the tournament, and Chelsea attacking midfielder Lucas Piazon was impressive during the short time he was on the pitch. Lucas Evangelista demonstrated the ability to play in deep and more advanced midfielder positions, and played a good chunk of the games thanks to this versatility. Centre forward Thalles scored a couple of goals and led the line well, so much so that the highly regarded Mosquito remained on the bench for much of the competition.