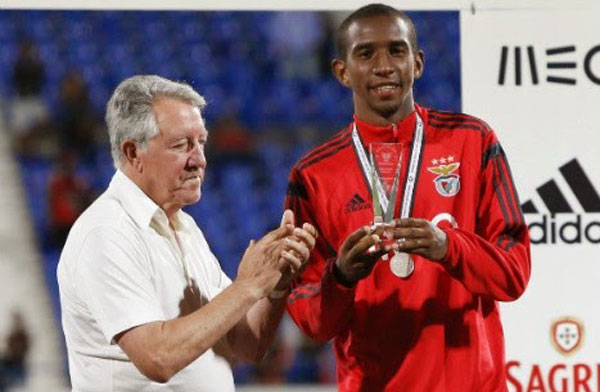 Young Brazilian attacker Anderson Talisca recently completed a £3.2m move to Benfica, after a string of impressive performances at Bahia saw him become one of the most eye catching players in the Brazilian league.

Talisca was born in the city of Feira de Santana, Bahia, 70 miles from state capital Salvador where he would eventually begin his football career. He joined Esporte Club Bahia as a youth player in 2009 and has progressed through the ranks, becoming one of the best players in the first team prior to his move to Benfica.

Anderson Talisca (Bahia) is joining Benfica, he was arguably the best young player in the #Brasileirão before the World Cup break.

The transfer fee is the largest ever received by Bahia, but the club will only receive 50% of the money as third parties and investors pocket the other 50%. On leaving the club Anderson commented:

“[The move] was good for me and good for Bahia. It will provide money for the club and will also help my family who needs me. I leave with joy and a little sadness too. It is that feeling of longing.

“I know one day I will return. Now there is a new chapter, but I will never stop being Bahia. I always honored that shirt and wore it with great pride, ever since I joined the youths in 2009. It was Bahia who opened the doors [for me]. I leave a message of happiness, not sorrow and longing, But I’ve cried a lot. Thanks for everything.”

What are Benfica getting?

Talisca has a weapon of a left foot, and can play in any position the manager thinks will bring the best out of it. For Bahia he often hung around up front on the right hand side, drifting inside to more advanced positions to unleash a shot or whip in an inswinging cross. He also has the ability to play in a more advanced team-mate, or find the run of an overlapping full-back.

An inside right/support striker slot is probably the position which gets the most from him, but he could perform in a number of other roles should the tactics require. His ability to deliver quality from a dead ball situation can be transferred to open play, and with this in mind he could ping passes from a midfield position, or swing crosses in from either wing.

This will be ideal for the more physical players in the Benfica squad, and you can imagine the likes of Luisão or Oscar Cardozo lurking in the box at set pieces, relishing the prospect of a Talisca cross. 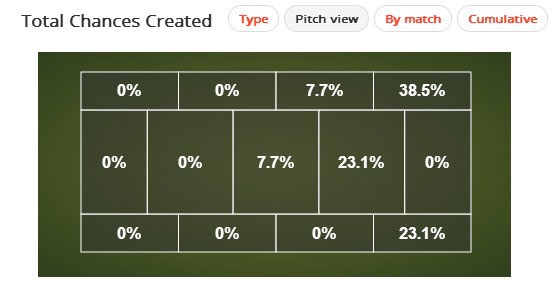 Talisca led the Bahia team for chances created with 13, the graphic above from Squawka shows where he made these passes. Some of the chances created in the left and right corners will be from corner kicks.

In terms of dribbling Talisca can be very unpredictable, which is both a strength and a weakness. At 188cm (6ft 2), he’s got a rangy running style, and can advance past defenders using his athleticism and considerable pace. The ball may run away from him at times due to a loose touch, but he very often recovers it himself.

The technique he possesses in his left foot could see him regularly lining up to take free kicks, and he isn’t hesitant when it comes to shooting from such set pieces. He will also use his right boot in open play should the chance arise, and has scored the odd goal with his weaker foot.

In terms of attitude on and off the pitch, you can see from his comments after leaving EC Bahia that he’ll give his all for his club, and he’s aware that his progress as a footballer will help him and his family enjoy a better life. His application on the pitch, in training, and his general enjoyment of the game will be influenced by this, and it’s something which will endear him to the fans if his performances are up to scratch.

Overall Benfica are getting an interesting young player who could replace the productivity of Lazar Markovic, albeit in a slightly different way. His development will depend on how much game time he gets, and how he adapts to a new country and a different league – as is always the case with this type of transfer.

If the player and club play their cards right, Talisca could reach a level which attracts interest from clubs in other European leagues. But should this happen the Benfica fans will be hoping they can keep hold of him.