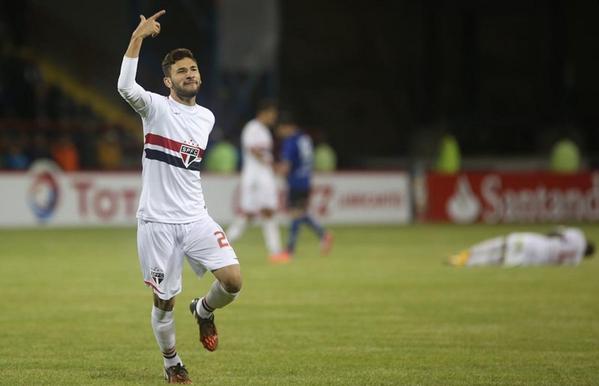 My new piece on this site is about one of the many exciting prospects who lined up for Brazil during last-year’s FIFA U17 World Cup. When you hear about that competition, you’d expect it to be Nathan who stole the show despite Brazil’s elimination in the quarter-finals, but it’s not him. Many fans of Brazilian football will know this player by now, but for those who don’t, let me introduce to you Gabriel Boschilia, a player who made his début for São Paulo’s senior team earlier this year after some convincing performances for Brazil’s youth team, as well as impressive displays in the prestigious youth tournament – the Copa São Paulo de Futebol Júnior.

Boschiia was born in Piracicaba in the state of São Paulo, and grew up at Santa Bárbara d’Oeste where he was honoured with a medal for being a prominent personality in the city. He captured the attention of several Brazilian clubs during his time at Guaraní, aided by an impressive display for them in the 2011 U15 Paulistão where he registered 11 goals in 18 matches, despite the club not being competitive enough to go further in the competition. He didn’t make any appearance for Guaraní’s senior team, but used to train with the professionals nevertheless.

It’s difficult for small clubs in Brazil to hold onto their talented youth products for long, and it wasn’t any different for Guaraní as Brasileirão outfit São Paulo secured his services in 2012 by paying just R$ 600,000. A transfer-fee which in GBP is almost half of the weekly-salary Wayne Rooney earns at Manchester United.

Boschilia was treated as a jewel since his arrival at São Paulo due to the promise he was showing at a young age. He lined up for São Paulo in their 2013 Future Cup winning side, scoring the winning goal in the final against Flamengo. He then took part in the U17 Brazilian Cup along with Aurinho and Ewandro (both are part of the senior team now) and scored in the final once again, also against Flamengo. Boschilia was called-up to represent the U17 national team in last-year’s South American Championship where he scored two goals, and put in some eye-catching performances.

It was during last-year’s FIFA U17 World Cup where he rose to worldwide attention, after running the show for Brazil along with Atlético Paranaense’s Nathan. Boschilia was arguably Brazil’s best player in the competition (the other side of the argument being in favour of Nathan), notching up six goals and three assists despite sitting out of the quarter-final against Mexico, where Brazil were knocked-out after a penalty-shootout.

He was subject to lots of media talk after the tournament in The UAE, with foreign press linking him with the likes of Arsenal. Another important factor was that, prior to this competition, hardly anyone outside Brazil knew Boschilia as most of the focus were on other players like Gabigol and Mosquito, but it didn’t take much long for him to get the recognition he deserved.

Boschilia stood out with two-goal displays against Honduras and UAE during the group-stage, and then grabbed another two goals in the last-16 fixture against Russia. He was suspended for the quarter-final against Mexico (who reached the final) when Brazil were eliminated. He won the Bronze Boot after finishing with six goals, just one behind Sweden’s Berisha and level with Nigeria’s Iheanacho.

Boschilia returned to his country to play for his club’s U20 team in the Copa São Paulo de Futebol Júnior (a competition familiarly referred to as the Copinha) and was one of the highlights of his team with four goals, despite being only 17. This earned him the chance to join up with the São Paulo senior squad, and eventually made his professional début against Mogi Mirim in a 4-0 win. He replaced Paulo Henrique Ganso in the 84th minute and then provided the assist for Douglas two minutes later.

It was always my goal to get to the professional squad. With focus and determination, I will do everything to help São Paulo

Boschilia represented Brazil’s U20 national team in the Panda Cup in China, helping his country win this particular cup, and once again showing his class by scoring a brace against the hosts in the last game. Boschilia is a frequent member of Brazil’s U20 team and also won the recent Torneio COTIF tournament held in Valencia, Spain. He, along with his club-mate Aurinho, is in line for a spot in the Brazilian Olympic team who will represent the country when Rio hosts the much-awaited sporting event in 2016.

Now, about his playing-style and qualities. First of all, Boschilia shows so much potential and has that raw talent, but hasn’t been able to transform his youth football showing onto the next level due to limited opportunities at club level. He’s traditionally a playmaker who slots into the hole behind the striker but likes to roam in and out of the penalty area, drifting to the right-flank at times. The most impressive quality of Boschilia is his technical ability, even at this tender age. The technicality he possess can be seen when he takes a shot from distance, which he likes to do so often, and also in his crossing from the flank.

He’s not the quickest in the business, but has enough pace to get by, and his goal-scoring statistics for Brazil and São Paulo’s youth teams show his eye for goal. His movement and playing-style is a little bit similar to Benfica’s new signing Anderson Talisca, but his vision to deliver that final ball reminds me of Ganso, and that’s the only similarity I see between him and Ganso. So to sum things up, he’s a Talisca with less goals in him and a more advanced version of the Ganso from 3 years ago. It wouldn’t be right to not mention his ability to take free-kicks for which he’s known since his youth days at Guaraní, and this is where his technique is once again highlighted.

His manager at São Paulo hasn’t given him many opportunities to show his worth due to the fact that he’s very young, and Kaká and Ganso have been on form over the past few months. Boschilia is also known for being inconsistent, and Muricy Ramalho is a coach who makes his players work so hard, as seen recently with the likes of Ganso who has improved his work-rate. The youngster is not at all comfortable when contributing defensively, which is another reason why his manager refuses to give him more minutes.

It is expected that Boschilia would be given more chances, and possibly a regular run of games, once Kaká says good-bye at the end of this year. That being said, Kaká has been very important tactically since his arrival, so the 18-year-old wouldn’t necessarily ‘replace’ the former Brazil number 10, but could be useful if the manager opts for a change of system. He’s also set to feature for his nation in the South American U20 Championship next year, where he’ll have an enthusiastic set of talented teenagers alongside him.