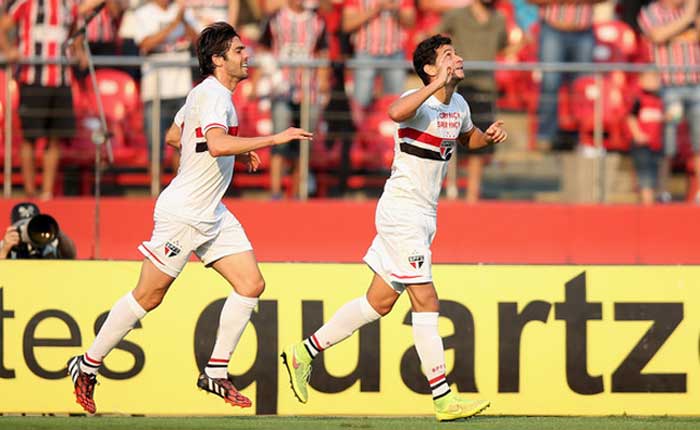 Paulo Henrique Ganso (right) of São Paulo, celebrates with Kaká after scoring a goal against his old club Santos.

There’s a certain player in Brazil, who around four years ago was regarded as the next big thing to come out of a country which is famous for producing some of the finest football prospects. ‘Next big thing’ is a term, often overused, which describes any young player who starts to show the slightest glimpse of promise, but in this case it had some substance. I’m not talking about Neymar here, but  his close friend, and a player who was once mentioned in the same breath as him – Paulo Henrique Ganso.

Years have passed and much has happened in that period, but is Paulo Henrique Ganso still a ‘prospect’? There can be mixed reactions to
this question now, mainly because it’s 2014 and he’s still yet to step up into Europe, the place where most judging his talent, thought he belonged.

Whilst his best friend has gone on to attain stardom by being the poster-boy of the national team, fulfilling his dream of playing for one of the biggest clubs in the world, Ganso has stalled.

After calls from thousands of fans for him to be included in the 2010 World Cup squad [although turned down by Dunga], thanks to the impressive partnership with Neymar at Santos, he made his long-awaited début for his country under newly appointed coach Mano Menezes.

“Ganso is an organiser who reads the game for the team, he puts the pass through on goal, he sets the rhythm. This player is hard to find”, said Mano Menezes before the 2011 Copa América. Menezes might have a point there, but Ganso has gone far away from this descriptions, and his place at national team taken by the more energetic talent of Oscar, who has also stepped up into European football, unlike the player whose name translates as ‘Goose’.

Ganso’s downfall can be partly attributed to his injuries, but that doesn’t tell the whole story. After injuring his anterior cruciate ligament in August 2010, and another thigh injury which almost forced him out of the 2011 Copa América (not to mention the team’s poor display in the competition) signs started to emerge which supported the argument that talk of potential stardom was premature. A poor run of form for both club and country could have been down to his concentration on more on commercial, activities than those on the pitch. Ganso felt less important at Santos and he thought the club had forgotten about him, spending all their time endorsing his friend Neymar.

Ganso incurred the wrath of Santos supporters after his next move, as he announced through the 3rd-party which owned a stake in him, that
he no longer wished to play for the Peixe. Sold to rivals São Paulo for €10 million, Ganso remained the same underachieving player there except for the occasional moments, once again failing to keep his mind on the right path.

But the second-half of 2013 saw a new Ganso emerge into the scenes after impressing for his club, but again, the consistency was lacking. He started showing glimpses of his Santos days, evident in his mazy run against Botafogo leaving defenders for dead with close control, only to hit the frame of the goal from an extremely difficult angle. To be fair, Ganso played a part in taking São Paulo to a decent position in the Brasileirão last year, after having a nightmare start to the season which even saw them fall into the relegation zone at one point. It’s now 2014, and we’ve started seeing an exciting version of Paulo Henrique Ganso again, since his fall from being one of the biggest prospects at Santos.

According to people close to the club, Ganso’s decision to part ways with the group that owned part of his rights – who were apparently pressuring him to things – was important in his revival at São Paulo. Or to put it simply, Ganso realised that time’s running out and has finally started to believe in his own ability, thereby concentrating more on where he should be – the pitch. Ganso himself believes that he’s in the best phase at the club since joining 2 years ago, and rightfully so. He’s also managed to stay away from injuries which is also a major plus. And it wouldn’t be right if I don’t mention the coach Muricy Ramalho here. The man who knows Ganso [and Neymar] very well from his Santos days where they won the Copa
Libertadores together. He’s definitely played a big role in this excellent phase of Ganso’s revival.

After the 2014 World Cup, Ganso has been in brilliant form which reached a point where fans were again calling out his name to be picked by new Seleção boss Dunga. He was instrumental in wins against strong sides like Santos and Internacional, scoring against both. It’s his confidence that strikes most of the fans, reminiscent of what they saw during his time at Santos with Neymar.

Someone watching Ganso for the first time would say he reminds them of a player from the 1980s due to his somewhat ‘un-Brazilian’ style, which is different to, say, Kaká, Oscar, or Philippe Coutinho. Although they do have a point when saying this because of his un-flashy and ‘lazy’ style of play, Ganso has actually worked on his defensive-contributions recently, drifting deep into midfield at times to operate as a central-midfielder when not in possession, and his work-rate has been impressive.

And now the big question – of whether it’s time for him to make the entry into European football or not – would depend on how he does in the
future. So it would be more sensible to make a conclusion at the end of the current season, considering Ganso’s inconsistency over the years, but these positive signs he’s showing at the moment is exciting for Brazilian football.