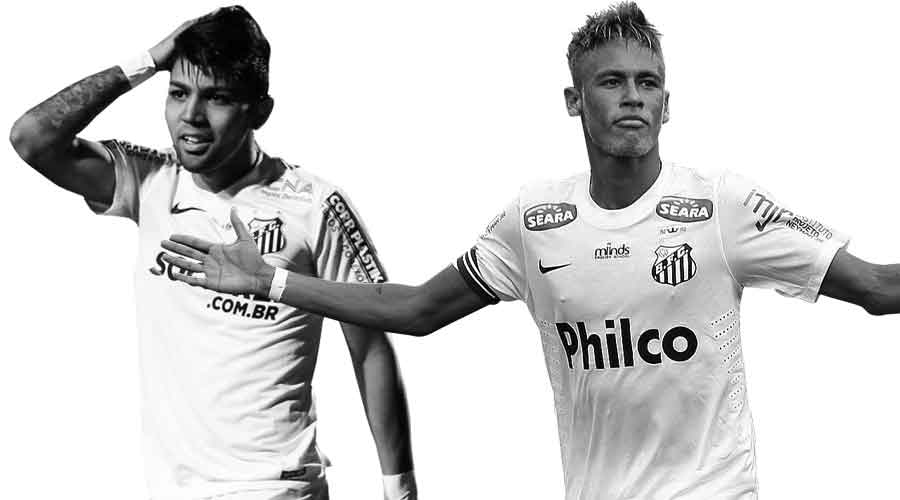 A few months ago a website wanted to pay me good money to go to Santos and write a profile piece on the team’s young striker Gabriel ‘Gabigol’ Barbosa.  And I ended up talking myself out of a lucrative commission.

The idea started to lose appeal when he did little of note at the start of the year in the South American Under-20 Championships.  And it died a death when he was not even selected for the World Under-20 Cup in New Zealand.  If he could not even got on the plane, how could we justify a piece arguing that here was the next big thing?

But something about the proposal bothered me from day one.  The whole approach, the ‘this is the next one off the production line’ thing was, it seemed to me, rooted in antiquity.  It was as if ‘7-1’ had never happened.

That is not to say that the Brazilian production line has stopped working.  There will always be players coming through in Brazil.  Factor in the size of the country, the importance of the game to the local culture – and the existence of the global market in footballers.  There is money to be made from scouting for gems.

But those involved in youth development would all seem to be singing from the same song sheet.  Year by year, they say, the quality is going down.  And they usually agree on where the blame should be pointed – the decline of street, park, wasteland football.  As a catch-all term, I shall refer to it hereafter as informal football.

European specialists have been lamenting this for years, for there is no better school of natural talent.  Even the Barcelona academy, so proficient at producing midfielders with a range of passing and an understanding of the game, struggles to produce those who are capable of the kind of inspiration which cannot be taught.  They buy in their one-on-one specialists from South America.  Surely the secret of Lionel Messi is, as footballing philosopher Jorge Valdano argues, that he is a perfect synthesis of the Barcelona academy and old fashioned Argentine street football.  Alongside him, they tried out Chile’s Alexis Sanchez before settling on their MSN attack, with Uruguay’s Luis Suarez and Neymar of Brazil.

Ah, Neymar – the proof that Brazilian football can continue to come up with top level talent.  The former Santos prodigy is clearly a remarkably skilful player, with a rich range of improvisations at pace.  There is, though, something different about him, something which cuts him off from some of the players of the past – his dependence on the referee.

For Neymar is less an old fashioned street footballer than a product of modern hot-housing, his potential identified early and groomed since then in a controlled environment.  One of the strongest characteristics of informal football, all over the planet, is an anarchic approach to law enforcement.  Usually the only rule which is ever obeyed is hand ball.  That aside, it can be a free-for –all, where the skilful have to come up with a self-defence strategy.  In the more regulated environment of futsal, the presence of a referee serves as a guarantor of some kind of order.

Neymar, then, has grown up with a self defence strategy entirely dependent on the referee.  It means that there is always the potential for friction, especially since he has his own criteria for what constitutes a foul.  All of this boiled over during the Copa America in Brazil’s match defeat to Colombia.  Under pressure from the need to carry the team on his back, frustrated by a first class marking job performed on him by Carlos Sanchez, Neymar ended up losing his self control, abusing the referee and picking up a four match suspension.  The more old fashioned street footballers grew up without the luxury of taking it for granted that they would be protected by a referee.

Informal football in Brazil remains stronger than it is these days in Europe.  But it is under attack for some of the same reasons behind its decline on the other side of the Atlantic – more gadgets giving kids a wider range of leisure options.  There are also more specific ‘developing world’ factors – urban expansion eating up some of the old spaces, and urban violence rendering unsafe some of those that remain.  Its decline is bad news – for there has never been a better training ground for the development of footballing talent.