Brazil defeated hosts UAE in the FIFA U17s World Cup, repeating the 6-1 score line from their first game against Slovakia.

The first game belonged to Atlético Paranaense duo, Nathan and Mosquito, and whilst both players but in top performances in this second group A fixture, the real stars of the show were Boschilia of São Paulo, and Gabriel of Santos. 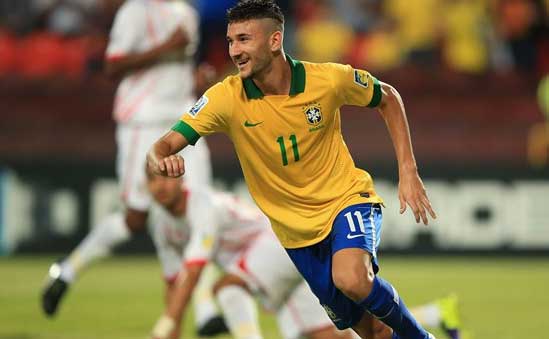 Boschilia scored two and assisted one goal in Brazil’s 6-1 win over the UAE.

Gabriel is one of the much hyped players in this Brazil youth side, and his short cameo appearance at the end of this game gave us some indication as to why so much is expected of him. His first involvement in the game was to set up Nathan for a goal with a great ball through the opposition defence.

The 17-year-old who bears the expectant nickname “Gabigol”, went on to set up another goal, this time for fellow substitute Joanderson of São Paulo, before living up to his name and grabbing a goal for himself in the 84th minute.

Wide forward Boschilia was impressive throughout the full ninety minutes, and deserved his man of the match award. He scored the first two goals of the game, and set up Gabriel for his late goal.

Other players worth a mention include two more São Paulo players, midfielder Gustavo who was playing what you might call the Paulinho role, and right back Auro who gave the team some good options in wide areas.