Brazil move into third place in the South American World Cup Qualifying table after a 3-0 victory against Peru in Salvador.

The three goal margin moved them ahead of Paraguay and Chile who’ve also notched up seven points from four games.

The Brazil side, containing a healthy mix of domestic based players and European based stars, lined up in a 4-1-4-1 formation with Neymar leading the line. 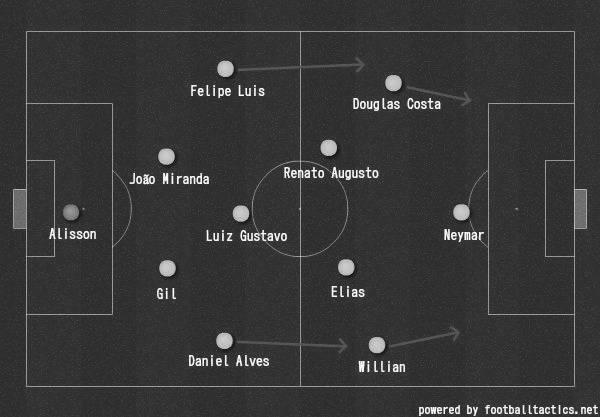 An early error from Willian led to an ultimately fortuitous chance for Paolo Guerrero, who fired his shot straight at Alisson in the Brazil goal. Willian gave the ball away initially, but Christian Cueva’s stray pass ricocheted off Willian straight into Guerrero’s path.

Peru started well and threatened the goal again when Carlos Lobaton’s free kick dribbled towards Alisson who palmed it aside with ease.

Brazil soon came into the game, and Willian set up Neymar for an early chance which he took from the path of Dani Alves and shot tamely at Peru ‘keeper Diego Penny.

Shortly after, Willian made inroads down the right again, playing a one-two with Elias before beating his man with a burst of pace and crossing powerfully into the box. The cross eventually found Douglas Costa who’d drifted in from his position of the left to turn the ball into the goal from just a few yards out.

It was a goal which Neymar watched and admired as his position in the area distracted a few of the Peru defenders, allowing Costa to sneak in from the flank.

Costa almost scored again in the first half when his left-footed free-kick from wide on the right was whipped into the box, missing everyone before rebounding off the far post.

Just as the players were thinking about their half-time refreshments, Dani Alves produced an excellent pass with the outside of his boot to find Neymar in the box. The striker chested the ball to control it before attempting an overhead kick which went just over. The move went down well in the Arena Fonte Nova, but the linesman’s flag, raised for offside against Neymar, returned the fans to their seats as the sides ambled off the pitch for a break.

The second half started in a lively fashion. Cueva forced a save from Alisson with a bicycle kick from close range, then moments later Willian was testing Penny with a rasping low shot from outside the area a the other end.

Willian and Costa had now swapped wings, in a move which immediately paid dividends. Costa received the ball on the right, dribbled directly towards the goal before setting up Renato Augusto on the edge of the area. The Corinthians midfielder placed his shot into the corner of the goal – his first for his country – and an emotional celebration ensued.

Dougie Costa – continuing his impressive form – was involved again as Brazil scored their third. He cut inside from the right once again, blasting a shot on goal with his left foot. Penny spilled the ball and Filipe Luis, who’d ventured forward from left back, slotted home the rebound with the assurance of a striker.

It was an encouraging win for Brazil, albeit against an opponent they’d be expected to beat – especially at home. There was the odd worrying moment in defence, but on the whole the back line looked a lot calmer without the wayward David Luiz, who was suspended after picking up a typically impetuous red card against Argentina.